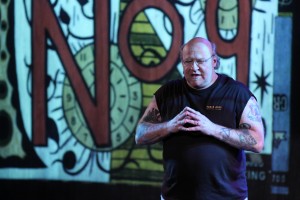 Newcity columnist Tony Fitzpatrick and cohort Stan Klein complete their “regular fucking art guy” trilogy of plays with a look back at the WWII-era men who spawned them. As expected, there are evocative visual detours to New Orleans, Wrigley Field and Comiskey Park on Disco Demolition Night.

Fitzpatrick’s his usual charming self, regaling the audience with his first “tough girl” kiss, his quasi-career with Chicago’s criminal elements, and the foundation his tough-as-nails tombstone salesman father gave him. Fitzpatrick’s father taught him to treat his art career like war. Currently, Fitzpatrick’s winning the battle.

This installment focuses on Fitzpatrick’s longtime friend, Klein. We learn that his father joined the army to escape starvation, that the Chicago Cubs don’t consider him usher material (thank God), and that he’ll never have a ballroom-dancing career. Together, they are regular guys who are too smart for the world but more than entertaining enough for us. (Lisa Buscani)