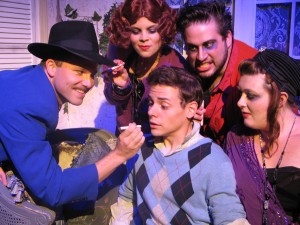 Though adaptations of film and television works abound in the theater world, Circle Theatre’s newest production “Reefer Madness” takes the end result to absurdly hilarious lengths. Taking its cue from the equally absurd Depression-era exploitation film portraying the hellish consequences of a “reefer” binge, Circle ups the ante considerably. The original plot would normally be absurd enough, charging everything from robbery to rape and cannibalism as genuine effects of marijuana use. Luckily, Circle preserves this hyperbolic quality along with the plot as a whole, in which two future pillars of society (Landree Fleming and Ryan Stajmiger) become entrenched in a reefer-lined hellhole.

Much beyond what will harken fans of the film back to the original, Circle takes the shocking and provocative tone of the film and translates it into practically every other theatrical element imaginable. Kevin Murphy and Dan Studney put together a fantastic set of music, with a pompous rock ‘n’ roll flair which matches the tone of the play perfectly. Host of the night and lecturer Jason Grimm makes fourth-wall breaking the norm and takes the proselytizing attitude of the show right to the audience. For those who think all drugs are created equal, the central foundation of the show will probably seem unsavory, even wrong. The more aloof will only find a raucously entertaining show. (Rob Underwood)