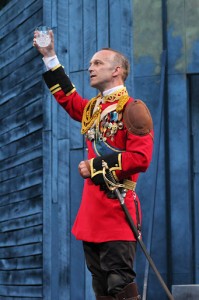 I did some research on Shakespeare’s “Richard III” for my undergraduate thesis, and the word I kept coming across to describe really successful performances of the role was “bravura.” Laurence Olivier gave the most widely-seen bravura performance in his film, as he sneered and snarled his way to England’s crown. But I almost feel as if I’d do James Ridge a disservice to apply “bravura” to his interpretation of the role. His performance is undoubtedly remarkable. But bravura implies a certain flashiness, and the brilliance of Ridge’s interpretation lies in taking away the theatricality. His Richard isn’t performing for us. He doesn’t say “look at how evil and brilliant I am.” He simply tells us what frustrates him, and what he plans to do about it. He struggles while we watch, and when he succeeds, no one is more delighted or surprised than he.

His success, though, is never guaranteed. Where the usual impulse seems to be to cut the parts of the women in “Richard III,” director James DeVita pits a formidable Margaret (Tracy Michelle Arnold) and Elizabeth (Colleen Madden) against Richard. Arnold and Madden both give superb performances as women too smart to be easily convinced by Richard, and their understanding of his character (and Margaret’s prophetic curses) force Richard into even greater displays of lying and murder.

Not that he isn’t already inclined to lying and murder. From his very first speech, he emphasizes what the rows and rows of medals on his military jacket have already told us: his military prowess doesn’t translate to a peaceful world. Instead of turning his rhetorical talents to England’s benefit, he survives this calm environment by creating as much danger around him as there is in wartime. In his mind, he has no other option. He knows how to kill and manipulate, but he doesn’t know otherwise how to deal with people. And he feels that lack. He may accept it, and proceed in the play as a committed murderer and villain, but he is acutely aware of his own disconnect from the characters around him. Watching him, it feels as if he wants to relate to the others onstage with him and knows how to behave as if he does, but his lack of real understanding forces him into the realm of imitation.

The most interesting thing about this Richard, though, is that it isn’t all imitation. He’s an incredible liar, of course. But he isn’t perfect. He isn’t a machine. This Richard is—impossibly, sympathetically—human. When he woos Anne, he very clearly wants her because he wants some woman to treat him with affection. When Margaret enters, he turns to flee. When his mother curses him, tears come to his eyes. When the ghosts of his victims visit him, he weeps when he realizes that even he cannot love himself.

Richard, in the end, is defeated exactly by that. He’s human. He can’t sustain a series of heartless killings if he has a heart. The collective weight of the murders press down upon him until he cannot bear it anymore. I’ve never before felt pity for Richard III, a character who murders his brother and young nephews to get a crown, but Ridge allows us to glimpse the person that Richard might have been had the circumstances of his life been different, and those flashes of humanity are as chilling as they are pitiable.

With Ridge, the women, and an impressive cast rounded out by David Daniel’s Buckingham—to say nothing of an interesting, changeable set by Takeshi Kata and the beautiful costumes of Rachel Anne Healy—this production is absolutely worth the trek to Spring Green. You won’t see a Richard like this again. (Erin Kelsey)