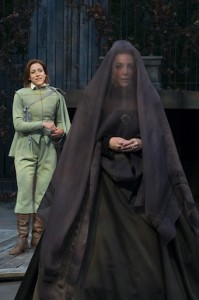 As a disclaimer: “Twelfth Night” is one of my favorite plays. I’ve seen multiple productions of it, studied the script extensively, loved it, struggled with it, laughed at it, and generally enjoyed every minute of what is probably Shakespeare’s most beautifully written comedy. The “Twelfth Night” currently playing at American Players Theatre is a brilliantly executed yet unusual interpretation that is well worth seeing.

This “Twelfth Night” is not about Viola. Nor is it about young love. Nor the good life triumphing over Puritan prudery. Nor is the show particularly funny, at least not in a slapstick way. It has little in common with any staging of the play I’ve ever seen.

Director David Frank tells us in the program that he found at the heart of the text a “yearning,” an “irrepressible desire for something more than we can reasonably hope for.” Yearning pervades the play, as most of the characters spend its length pining after someone: Viola for Orsino, Orsino for Olivia, Olivia for Viola (alias Cesario). But it is a Shakespearean comedy, so in the fifth act, everyone (with a few notable exceptions) ends up with the object of his or her desire, marriages abound, and the play ends happily. It’s a play about longing but, at least usually, the characters we care most about get what they care most about by the end.

But we’re not particularly attached to any of the usual favorites. Cristina Panfilio’s Viola is a charming but extremely awkward young woman, who falls for a foppish Orsino (Marcus Truschinski). It’s not uncommon for Orsino to be played as childish, but in this production Viola recognizes that he is. We wonder why she wants him so desperately, and she is so awkward we wonder why he wants her; their relationship never transcends that of master-servant. This produces a curious lack of finality at the end of the play, which is so much about Viola finally getting what she wants: she’s reunited with her long-lost twin brother and is proposed to by Orsino. In this production, the emotional weight of the fifth act is entirely taken away from her. Frank’s staging constantly puts the focus on someone else. When she meets her brother, his would-be lover, Antonio, is positioned between them. When Orsino proposes marriage, Feste sits between them and the audience, looking as upset as the father who knows his child is marrying a dope.

It is Feste, I think, who stands in for Frank in this production. “What is love? ’tis not hereafter;/ Present mirth hath present laughter;/ What’s to come is still unsure,” he sings, and no one is more aware of that than he. John Taylor Phillips is a compelling Feste, who seems to spend the play saying, “I’m playing the fool, but it’s the young who are foolish.” We’re never quite sure what he wants, but he finds the youthful yearning of Viola and company to be almost tragic.

The tragedy, though, is not that the characters are young and foolish, but that they are unable to remain so. “Youth’s a stuff will not endure,” sings Feste, against the backdrop of Robert Morgan’s beautiful, autumnal set. Frank himself, just a few seasons from retiring, may understand that truth as well as Feste does. (Erin Kelsey)