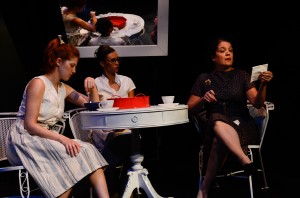 Though different people will draw varying connotations as to what constitutes an “American plan,” Artistic Home helps out by indicating the original source of Richard Greenberg’s title as the name of a hotel management system in which guests pay a fixed rate for three daily meals, in addition to their rooms. A quote brings the metaphorical nature of the title more in focus, reading “The American Plan invites waste, and no matter how much is charged for the meals, the average patron, when unrestricted in his ordering from the card, will order more than necessary.” The first scene, however, indicates clearly that this play is more than simply about wastefulness or overeating, despite how intractably American those concepts have become.

A boyish yet distinctly virile young man, Nick (Nick Horst), is on vacation with his fiancée, lounging on the beach while attractive, young Lili (Margaret Katch) does the same in a hammock. Though she begins the flirting, Nick plays the game well. He seems to have his whole life ahead of him, in ways that directly correlate with the broken cliché of the American dream (his optimism would seem unbelievably naïve were it not 1959). He’s going to NYU for architecture, he’s engaged to a New York socialite who is downright bonkers over him and he has the pluck and gall to say simply, “I want to build cities. A whole city, all my own.”

But Lili is borderline psychotic, kept in almost Dickinsonian isolation by her mother in the Catskills. One wonders, however, just how frenetic this character is meant to be: Katch’s performance is anything but subtle, and with little backstory that can serve as solid foundation for her behavior, we are left with a Freudian stereotype of female hysterics one would have thought was left behind long ago. The arrival of Gil (played with excellent restraint and tact by Tim Musachio), a man from Nick’s past who he’d rather not see, also threatens the stability of Nick’s future. Though well-staged in the limiting space of Stage 773’s theater The Box, the play ultimately stands as a somewhat tired eulogy for the American dream, with the added histrionics of Lili, for whom depth was certainly intended but not fully realized. (Rob Underwood)