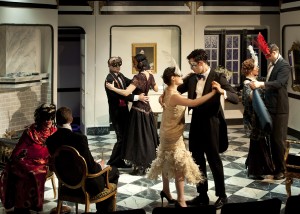 Noel Coward’s “The Vortex” has only appeared in Chicago three times since its debut here in 1926—the first time actually starring the author himself. But considering the frequency with which Coward’s other titles like “Blithe Spirit,” “Private Lives” and “Present Laughter” are unearthed on Chicago stages–not to mention the sheer number of companies in Chicago dedicated to classic work—three productions of a single play in eighty-six years is a staggeringly low number for a canonical playwright of Coward’s magnitude.

A new company, the Dead Writers Theatre Collective, has chosen “The Vortex” as its inaugural production, and while I wish to inform you that the third time is, indeed, the charm, neither sorcery nor act of man or god can resuscitate this dusty script, unusually ephemeral and irrelevant for a Coward play. The playwright’s first major success in both his native England and the United States, the popularity of “The Vortex” might have largely been owed to its shock value.

In 1924 England, the play’s frank, unsubtle depiction of a married middle-aged woman who courts a younger man the same age as her own son caused quite a stir. But today, intergenerational relationships, regardless of circumstance, do not bring all of society to a screeching halt. What with the rise of television series like “Cougar Town” and “Desperate Housewives,” a fling with a younger person of either sex tends to elicit more high-fives than admonition. And well it should.

More importantly, such relationships are no longer solely the folly of the upper crust—Coward’s chief dramatic target. That the majority of the intense drama of “The Vortex” comes from a minor social stigma rather than son Nicky’s cocaine addiction or one of the play’s countless unfulfilled subplots is challenging for a modern audience to embrace. Without the heartbeat of Coward’s light verbal patter, the overcooked tragedy becomes, in 2012, an unapproachable museum piece. Dead Writers Theatre Collective’s revival, though visually luscious and comfortably acted, does not provide a compelling justification for why this play must be performed today other than as a helpful reminder of its existence.

“The Vortex” begins as many of Coward’s over fifty plays do: in the drawing room. A flurry of larger-than-life characters enter and exit, with each successively topping the eccentricity and witticisms of the one before. The first act’s speed and sharp banter create high expectations for a riotous second and third, but it is in the second act that the proceedings take a sharp turn for the tragic. Affairs, addictions and disillusionment are revealed and, meanwhile, the audience’s laughter becomes stifled and awkward.

“The Vortex” presents 1924 English society’s unfortunate ageism and sexism candidly. But without any conscientious development or thought-provoking discussion, the play brings about shocks by way of a well-spoken soap opera. Aside from the pesky subject matter, the construction itself signals a playwright early in his career, teetering on the edge of brilliance, but lacking the refinement he would eventually acquire. For example, a plethora of characters are introduced, but ultimately have no consequence to the plot or to the world they inhabit.

Although most of the people onstage exist as minor devices, director Jim Schneider has accrued a relatively strong smattering of actors. It isn’t often that storefront performers speak in Received Pronunciation with the fluidity and accuracy of this cast, all of whom manage a pretty close approximation of Coward’s own recorded verbal patterns. Two sharply funny women—Betsy Pennington as wry singer Clara Hibbert, and Skye Shrum as the absurdly named fiancée of Nicky, Bunty Mainwaring—have a terrific sense of comedic timing and an affluential grandeur about them, but their characters are of little importance. 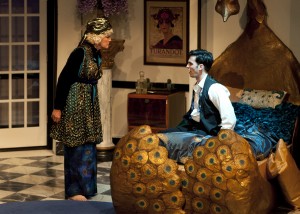 Bonnie Hilton, as Mrs. Florence Lancaster, our desperate housewife, makes biting quips, jests and guffaws with her tightly spoken dialect in the first act, but as the play’s drama heightens, Hilton’s voice and physicality become overplayed. And as her bitter, engaged-to-be-married son Nicky, Kaelan Strouse suffers from those same pitfalls, his own overacting commences much earlier on and occurs more often. By the time Strouse is viciously condemning his mother in the third act, the wailing and writhing of the two comes off as indulgent for both the playwright and the actors. I was unable to discern any love between mother and son or between Florence and her young lover Tom (Danny Pancratz). That missing link makes for a whole mess of unlikable characters.

Given the unrealistic size of the performances and the decadence of the scenery, Coward is best relegated to his original proscenium setting. In a shallow thrust at the Greenhouse Theater Center, Dead Writers Theatre Collective suffers from those Cowardian qualities, but other than several overcrowded party scenes, the space is well navigated by director Jim Schneider. But lucky Schneider has the advantage of staging on an extremely impressive, lavishly adorned set designed by Edward Matthew Walter. Walter’s three distinctly realized designs manage to be spatially economical and yet seemingly unaffordable. In storefront theater, two-by-fours can be scarce, let alone giant swan beds. The creativity at play is strong for all involved and the allocation of resources by Dead Writers Theatre Collective, even stronger. I only wish this promising new company had kicked things off with a better play. (Johnny Oleksinski)