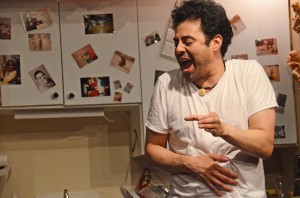 On a Friday night at Calles y Sueños in Pilsen, a small crowd gathers for the monthly Noche de Monólogos (Night of Monologues), a night of performances and open mic that on this night ranges from fiction reading to monologues in character to non-narrative movement-based performance. Organizers of the event speak in Spanish and English, as do the performers. People greet each other with hugs and kisses; throughout the night, audience members occasionally yell encouragement to performers and applaud with a level of enthusiasm you might get from a proud, affectionate family.

This month’s Noche de Monólogos was a preview of the upcoming festival of Latino solo shows, “Yo Solo,” a collaboration between Teatro Vista and Collaboraction. The festival will be a series of six solo performances by Latino artists arranged in three repeating programs, each of which is a pair of two of the shows.

Sandra Delgado, one of the performers, as well as the producer of the festival and long-time ensemble member of both theater groups, spoke about how exciting this festival is. The creators wanted a broad range of artistic styles and experiences represented. During the selection process, she says, “so many of the submissions included something along the lines of: thank you for giving us the opportunity to express ourselves.” Teatro Vista has been a leading voice in Latino theater for years, but this show is something new. With solo performances, Delgado says, the actors get to be creators in a way that traditional theater doesn’t allow. Part of putting on Yo Solo is empowering actors, giving the “chance to do something different, build their skill set in a supportive and safe environment.”

Solo performances, too, offer a unique experience of intimacy in theater, says Delgado: “You can be honest and unfiltered and it’s immediate. And I also think with these stories, although they’re very specific to the people, I think that specificity results in a universality to the pieces. I think solo work is inherently something that people can really connect to.”

Of the six artists featured, four are Chicagoans, and two will be coming from out of town. Delgado will be performing a piece called “para Graciela,” a kind of tribute to her maternal grandmother; Lisandra Tena, a recent graduate of DePaul, will perform “Guera,” an interactive piece in which the audience chooses parts of the performance from a menu. KJ Sanchez’s “Highway 47” tells the story of a land battle involving her family in New Mexico; Juan Francisco Villa’s “Empanada for a Dream” tells the story of being the only Colombian family on the Lower East Side. Febronio Zatarain’s “La Risa de Dios” gives a Mexican immigrant’s account of arriving in Chicago, in music and monologue (in Spanish, most likely with supertitles); Rey Andújar’s “Antípoda” combines spoken word, poetry, and Corporeal Mime. (Alli Carlisle)