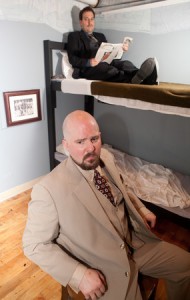 TUTA’s execution of Pinter’s fraught and deeply unsettling play about two hit men waiting for a job in an anonymous room is deeply astute, restrained and powerful. For the first production in their own studio-theater space in West Town, TUTA transforms their hardwood loft into a claustrophobic domestic space that also implicates the audience in the play’s action; standing on a carpeted catwalk above the walls of the stage’s small room, we’re in the position of security cameras (emphasized by period film footage projected onto the walls and a surveillance camera screening the heads of those entering the space). As we look down on the two men, the titular dumb waiter (a small service elevator) delivers mysterious and impossible written orders for food as they wait in edgy, increasingly paranoid confusion. “The Dumb Waiter” is classic Pinter—sharp but heavy symbols of power relations, dark biting humor, and almost unbearable growing agitation—and director Zeljko Djukic splices in  some helpful moments of lighter comic relief without ever shying from the strongest political themes. Andy Hager as the senior partner Ben (who attempts to distract himself from the operation by reading tabloid scandals aloud) and Trey Maclin, the cub Gus who asks too many questions, bring dynamic and off-kilter energy to their eruptive relationship. But the strongest character in the show might be the room itself, exerting structures of control over the characters and suggesting dark implications for the role of silent audiences elsewhere. (Monica Westin)