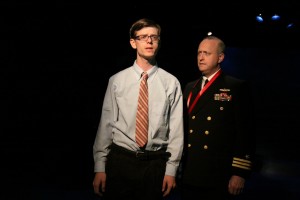 Like the shaky father-and-son relationships this new play unevenly depicts, David Alex’s “Adrift,” being performed at Greenhouse Theater Center by Polarity Ensemble Theatre in association with Azusa Productions, is, itself, lost at sea. Perhaps life’s ever-changing direction has parallels in the ninety-minute play’s own convoluted structure, but the development of “Adrift”‘s narrative, though pure of conscience, is predominantly absent of clarity and interest.

“Adrift” tells the intersecting story of two father-and-son pairs, Isaac and Jack and Tom and Judd, all wading through the world with familial guilt, hostility and regret as so many of us are wont to do. The adult Isaac (Colin Henry Fewell) is a teacher, interviewing for a math position with Judd (Gary Murphy), a high-school principal and the father of Tom (Eric Ryan Swanson), a disenfranchised young student at that same school.

Tom and Judd’s generational divide and many blatant miscommunications, usually culminating in a stormy fight, exacerbate Tom’s already-frayed relationship with his father. The boy’s typically realized adolescent rebelliousness gets the better of him in just about every conceivable situation, no matter how inconsequential the situation might be.

Isaac, in the inspirational manner of Mr. Holland, becomes Tom’s math teacher and attempts to course-correct the boy’s relationship with his dad, incidentally imparting on him a passion for the liberal arts. Meanwhile, Isaac’s interactions with his own father, Jack (James Eldrenkamp), a now-dead naval officer, are presented both in flashback and as a real-time figment of Isaac’s imagination.

In truth, little happens in “Adrift” outside of the many natural and obvious departures and reconciliations of life. Father-and-son plays are hardly experiencing a drought in the American theater, and I do not see what sets this particular work apart from the rest of the pack. There is no extraordinary reason for why these two relationships are any more damaged than any other, onstage or off.

On the fringe of the core plot, there is a loose through-line of unfair academic politics and some recurring, however oddly passive, scenes portraying Jack’s Post Traumatic Stress Disorder. But as Eldrenkamp’s performance doesn’t apply any façade of increasing age, the timeline of those scenes is muddled and terribly difficult to follow. The story of Isaac and his father, being primarily told in flashback, is poorly differentiated both visually and tonally from the scenes in the present day. Fewell as Isaac does apply a wide-eyed naïveté to his childhood persona, but besides that early scene, mostly stays the middle-aged course.

The arc of Tom and Judd’s relationship is comparatively uninteresting to Isaac and Jack’s and lacks dramatic pitfalls or euphoria. Their yelling matches are shallow and their togetherness in the play’s end comes across as forced. Judd is also the most flatly written character of the play, favoring test scores to intellectual enlightenment and all but refusing to get to know his son. Tom, though a bit stereotypical teenaged, is played without overblown sentiment by Swanson, and the audience resultantly relates to his plight much more so than the other characters’.

The story and dialogue is clouded by math pablum, golf jargon and literary allusion—most notably to Samuel Taylor Coleridge’s “Rime of the Ancient Mariner.” While a single, solid motif might have informed the play’s sequence of events, put together, these devices serve only as a distraction from the heart of the story and hinder the believability of the relationships. Also, such a weighty amassment of intellectualisms betrays an irksome, distancing pretentiousness.

Director Maggie Speer offers a straightforward staging of “Adrift.” The characters’ movement through space is logical, despite a few awkward student-teacher interactions with the audience. Scenic designer Dennis Mae has also framed the stage with Plexiglas covered in geometric instruments, plastic fish and other kitsch. Even though they only act as a light border of the proscenium, they imply a much stronger fourth wall than what is at play, negatively impacting character appeals to the audience.

The set, while unquestionably well crafted and aesthetically pleasant, is smooth and curvaceous evoking easy relaxedness. The dominating pale-blue color scheme, in cahoots with the rounded edges of the platforms, emulates oceanic waters, but enacts a lagoon’s calm. Being a son myself, I know these lines of paint, dialogue and story could use a little more jaggedness. (Johnny Oleksinski)