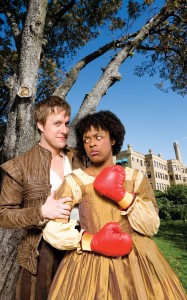 Chicago Shakespeare Theater approached acclaimed local director Rachel Rockwell more than a year ago to propose a stunning new project: a “Shakespeare in the Parks” tour of Chicago for her Shakespearean directing debut production, “The Taming of the Shrew.” It’s a thrilling project for any lover of family theater and community art, especially since it’s the inaugural installment of what artistic director Barbara Gaines described as “a new Chicago tradition” that brings art to the neighborhoods.

Chicago Shakespeare used data from an extensive survey by the University of Chicago to pinpoint areas of the city with the most arts-attending citizens, most of which were located near Lake Michigan and close to the center of the city (no surprise). The company used this data to pick parks in neighborhoods without much access to arts and culture and scheduled “as many as they would let them,” according to Gaines. The idea of a new audience pool thrilled director Rockwell, who says, “These [actors] could perform this play in a McDonalds with no problem. Bring it on!”

The first performance of “Shrew” took place on a recent Sunday at the South Shore Cultural Center, a South Side venue that appears to be a guarded choice—there’s a perimeter fence, lake-side seclusion from the neighborhood and a protective bunker-like golf course. Upon arrival, the demographics of the audience were disheartening, over half appearing lost and new to the cultural center and to the South Side in general. The entire aura was overwhelmingly “uptown,” from the Boeing-funded and well-appareled stage and set, to the “hearing Shakespeare” tutorial given by a company member, to the odd and racially charged casting of a hilarious but very white Matt Mueller as Petruchio with a brilliant, black, and even more hilarious Ericka Ratcliff as Katharina. For a South Side performance meant to be “uniting the community through timeless and universal themes” of Will Shakespeare, Will’s themes of racism and misogyny read more as negative commentary than as fodder for comedic entanglements. 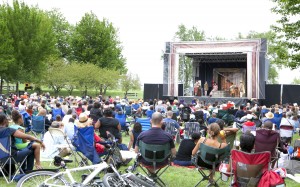 It was difficult to tell if any audience members paid special attention to the thematic and cultural clashes. The performance, despite the wit and fun, is an odd choice for Chicago Shakespeare’s tour of the city. Rachel Rockwell admits that the play is “about labeling” and contains definite currents of misogyny that the troupe has attempted to hide, but is confident that even with these gut-flipping touches the performance remains accessible. “I want [the audience] to see that even though the man is wearing pumpkin pants, he is the same as you!” she laughs. “I think people will see themselves in it and, hopefully, they will be able to laugh at themselves.”

The audience certainly laughed, and perhaps this journalist’s misgivings are unfounded. Comedy, in most guises, is able to transcend difference. Rachel hopes that the “tradition” becomes instantiated, wishing to see “Much Ado About Nothing” on a future roster. But for now, she is content with her first Shakespearean foray and looks forward to her next project: roller-skated “Xanadu.” (Eric Shoemaker)