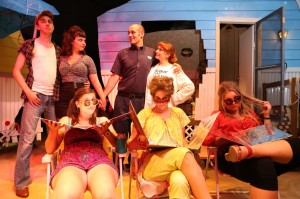 Kick off your shoes, tease up your hairdo and cross on over to this side of the tracks, otherwise known as Armadillo Acres Trailer Park. Relatively new theater company Kokandy Productions presents ‘The Great American Trailer Park Musical” in the intimate space at Theater Wit. Closing out the summer with plenty of cheap thrills, ‘Trailer Park” is a pulpy little comedy with a big old heart.

Kokandy Productions was started in 2010 by Scot T. Kokandy who had a hand in producing last year’s Broadway revival of “Godspell.” Kokandy Productions has since set up shop in Chicago, and “Trailer Park” is their first local show.

Written and composed by David Nehls and Betsy Kelso for the 2004 New York Music Theater Festival, “The Great American Trailer Park Musical” is about the sleazy American underbelly and the struggles of its people. Nehls and Kelso’s clever lyrics are chock full of American pop-culture references and accurately depict a subculture of simple folk overexposed to tabloid news and bad TV. After a brief Off-Broadway run in 2005, ‘Trailer Park” has enjoyed several international productions (probably to the embarrassment of many Americans). Kokandy’s production of ‘Trailer Park” is a first for the Chicago area and it sets the bar high for the next company that tackles this hilarious rock musical.

Armadillo Acres Trailer Park is home to a group of lovable yokels. The show is narrated by park manager Betty (Danni Smith) whose wild eye action creates moments of sparkling physical comedy. Along with her pals Lin (Ashley Braxton), so named because of the linoleum floor she was birthed on, and teenage Donna (Jennifer Wisegarver), this Greek chorus provides more than just backup—especially Wisegarver in her double role as Tina “the flan girl.” The real story here is a seedy love triangle between TV-addicted agoraphobe Jeannie (played by the adorably authentic Christina Hall) and her philandering husband Norbert (Jonathan Hickerson). Drama unfolds when the new girl in town Pippi, the harlot with a heart (Bri Schumacher), begins a sultry affair with Norbert.

The best part about this cast is their total commitment to these down-home roles. It’s like watching a really consistent ninety-minute SNL sketch, only these girls can really sing. The country-twanged music is as pleasing as it is catchy. Director John D. Glover has even added comedy into sequences where it’s absent from the book, like a number in which all the cast members top each other with one ridiculous wig after another. Though the laughs are abundant, there are moments of tenderness like a duet (akin to a song Delilah might play) between Jeannie and Norbert.

This vividly colorful production brings the trailer park indoors and keeps the audience giggling with delightfully tacky costumes and set pieces. Take ‘The Rocky Horror Show,” with its absurd brand of raunchy humor, and pair it with the Southern charm of “Steel Magnolias,” huff a bunch of markers, and the outcome is ‘The Great American Trailer Park Musical.” Quick with jokes and full of toe-tapping tunes, this musical is a good time from start to finish. (John J. Accrocco)