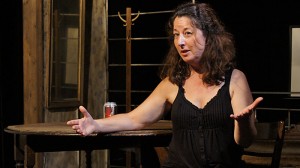 Summertime has been christened Chicago’s favorite season, not only for muddy music festivals and boozy street fairs, but also for those elusive one-person shows. In putting up the physically modest productions in the height of July and August, perhaps companies are conserving their already scant resources for the hurly-burly of fall and winter. Or maybe the oppressive temperatures are nudging the theaters against packing their stuffy stages from wall to wall with perspiring bodies trapped under the gaze of hot lights. No matter the justification, the trend is a welcome and colorful shift away from the usual weighty ensemble fare that resumes in full force come September. I say, “Bring on these singular sensations!”

In the eye of Redtwist Theatre’s concurrent production of “The Glass Menagerie,” comes the company’s off-night, three-performance presentation of Daria Harper’s one-woman show, “The Devil In the Dirt.” The play, created and performed by Harper and directed by Mary Ann Thebus, cleverly exists as a subtle, contemporary companion piece to “Menagerie,” both united by themes of isolation, family ties and abandonment. In Williams’ play, the ominous, hovering portrait of Laura and Tom’s father hangs over the Wingfield’s living room, acting as the “fifth character” and taking a fair chunk of responsibility for his family’s silent desperation. Comparably for Harper, the titular “Devil” refers to her main character Cindy’s own father, and the tarnished legacy he left behind above ground.

While developing “The Devil In the Dirt,” Harper was inspired by the work of fellow solo artist Anna Deavere Smith. Both women re-enact interviews with their main subjects, though Deavere Smith, in her documentary-style “Fires in the Mirror” and “Twilight: Los Angeles,” does so with more detailed meticulousness and topical relevance than does Harper.  Harper held interviews with the charismatic Cindy and the other Stokes sisters to weave a cohesive theatrical experience from those talks. And, in so doing, Harper has surely honored Cindy and her courageous, unbelievable life. But theatrically, in sewing together a compilation of first-person stories, the performer meets resistance in establishing sustainable conflict and purposeful narrative. Why this story at this moment?

I was often enthralled by Cindy’s anecdotes as separate morsels, but their gradual accumulation felt, at times, cobbled together and unnaturally forced into place. Appending each story Harper spins is some derivation of “and that reminds me of another time…” And then the next tale commences just as the one that preceded it. The structural spine becomes an exercise in one-upmanship, which proves disparate and frenetic as a theatrical whole. However the vibrance of the Cindy character and the undeniable soul of the material contained within the slippery frame is absolutely engrossing and deserving of a future life.

Atop “Menagerie”‘s skeletal, splintery set, “The Devil In the Dirt” begins with hip and folksy music of a corrupt tenor composed and performed by Sophia Okugawa alongside band member Danny Zezeski. They return at the forty-five minute play’s end to perform the title song, but as their preshow gig comes to a trickling close, Cindy jettisons onto the stage. On her person are only an unassuming box of cigarettes and a can of Diet Coke. Cindy cracks open the Coke and begins to sip. She smokes not one of the cigarettes, but they remain quietly perched on the table–Cindy’s emotional crutch.

As Cindy rattles off her stories, they are initially charming and curious, but gradually corrode exposing decades of unfathomable household horrors. Cindy shyly reveals that her father had sexually abused her and his other daughters as children, and threatened their physical safety on many occasions thereafter. However, despite his wrongdoings, Cindy maintains a conflicted reverence and respect for her dad. Her tone is never snide or acrimonious, but constantly giggly—a perpetual life of the party upholding a bold exterior with infectious, booming laughter.

Harper is a deeply personable performer who is very much alive and present in the room with her audience. At the opening performance, the theater’s lights extinguished briefly, and as we sat there in pitch darkness, Harper continued on, telling us, “This is just like the story I just told you!” Though undoubtedly accidental, that shadowy deluge transported the audience into Cindy’s personal space through a shared experience. Fearless and gung-ho, Harper grabbed a hold of the gaffe with a campfire’s twinkle in her eye, and reformed that unlikely error as an enchanting twist of fate. It is the performer’s brimming vitality that takes this flawed drama to a higher level. (Johnny Oleksinski)