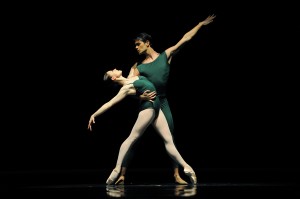 The biggest dance event of the year takes place next week at major venues in and around the Loop. This year’s Dancing Festival expands to six days of performances, films, lessons and lectures, gathering artists and experts from across the city and the nation to make the art form more accessible—all events, including the grand finale at the Pritzker, are free of charge—in big summertime movementpalooza.

In years past, the Chicago Dancing Festival acted more as a magnet for high-profile companies from the coasts as it did a showcase for Chicago’s considerable homegrown talent. The big-name guests return this year (Martha Graham, the San Francisco Ballet, the pas de deux emissaries from the New York City Ballet), but the spotlight is focused throughout the week on Chicago movers as well, from top caliber artists to aspiring pros to recreational dancers and to everyone else living, working, playing and moving to the rhythm of this city. 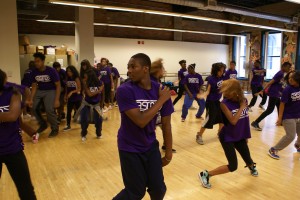 Two pieces, both of which bracket the festival in the Monday night “Chicago Dancing” program and the “Celebration of Dance” at the Pritzker, honor the populist origins and possibilities of dance. One is a hip-hop piece created by New York-based choreographer Nicholas Leichter and performed by an ensemble of nearly forty teenagers from the Gallery 37 chapter of After School Matters. Leichter said he came to the project with no agenda, looking to challenge himself, the students and current notions of urban dance. In four short days, these high-school students learned Leichter’s stomping, jumping, popping moves (punctuated with freestyle breaking from a few key soloists) and held a press preview in the Gallery 37 studio. When asked why they enjoy dancing, their answers—it’s fun and relieves stress, it speaks to the audience’s subconscious, it lets you express your feelings, you can tell a story, you can be weird, you can do anything—were poignant reminders of the universal joy of creative movement.

The other community-driven number is also by a New Yorker—Larry Keigwin—who visits Chicago to stage a new iteration of his Bolero series. Keigwin invites the masses (literally masses; over eighty non-dance-professional Chicagoans have volunteered to participate) to dance to Ravel’s famous score in tribute to their home. Unlike Leichter, who actively seeks out communities to engage, Keigwin conceived the Boleros from the choreography outward. “I wanted to do a Bolero New York and realized I couldn’t represent the city with just dancers,” he said via phone. Keigwin has already done a Bolero Santa Barbara, Bolero Colorado, Bolero Akron and Bolero Suburbia as well as Bolero NYC. His themes to build on in Bolero Chicago: wind and sports.

These two pieces open for major Chicago companies Giordano Dance, Hubbard Street and the Joffrey Ballet Monday, then for the San Francisco Ballet, Houston Ballet, Martha Graham Company and NYC Ballet (and Hubbard Street again—the excellent company performs two pieces in the fest, one by Twyla Tharp, one from Ohad Naharin) on Saturday. The days between are packed: Tuesday, the MCA will screen dance films from noon to 8pm—check out Daniele Wilmouth’s short featuring Mucca Pazza and choreography by Peter Carpenter if you can—Wednesday’s program at the Auditorium Theatre is dedicated to stellar visiting companies including Ballet Arizona, Brian Brooks and Pacific Northwest Ballet; Friday we’re back at the MCA for a panel discussion with prominent Chicago choreographers Lane Alexander, Ron De Jesus, Carrie Hanson and Julie Nakagawa and moderated by writer/dancer Zac Whittenburg. The discussion includes a few short performances including one from FootworKINGz, the mind-blowing crew that lit up the floor in the Chicago Human Rhythm Project’s Global Rhythms series earlier this month. And Thursday night is all about you, your friends, anyone in the city who loves to dance. The fest takes an evening of the season-long SummerDance series under its umbrella: a one-hour dance lesson followed by three hours of live music in Grant Park. And if you can’t make it that night, go back for Swing, Salsa, Two-step, African dance, Mambo or the myriad other styles taught most nights in the park from now through September. See dance; dance yourself. Enjoy the summer.