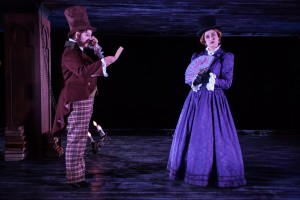 “Surely, man had never before so terribly altered, in so brief a period, as had Roderick Usher!” says the all-too-curious narrator as his eyes befall a boon friend, Roderick, in Edgar Allan Poe’s gothic short story “The Fall of the House of Usher.” Reuniting with his pal, he observes, not only a change in Roderick’s demeanor, but a stunning physical transformation–a person familiar, but mysteriously altered. Perhaps “stunning” is not a strong enough word to describe the visitor’s initial impression of Mr. Usher in The Hypocrites’ new staging of the tale, however. For, in director Sean Graney’s hour-long adaptation, Usher is portrayed by a woman in top-hatted drag. Well, three women actually, in breathtaking rotation.

So, why a cast of three formidable ladies? After all, “The Fall of the House of Usher” is a rather masculine read. Two of the three literary main characters are men, and the sole female character, Lady Madeline, is written to be completely silent. Past onstage efforts have been made to feminize Poe’s exercise in Romanticism. One such production occurred in 2006, when Steppenwolf for Young Adults presented a musically luscious, but meandering production of “Lady Madeline” with the horror story told from the sister’s perspective. But never have women played so integral a role as they do here.

Graney has gone so far as to alter the Visitor from a man to a woman reminiscent of Bram Stoker’s Lucy Westenra, offering compelling justification as to why the character remains so long in the spooky Usher home–romantic love. He has also contributed a Scottish-brogued Maid–perhaps inspired by a fleeting valet’s appearance in the original–who spreads out the author’s wordy exposition. With three face-painted women obscured under ghoulish lighting inspiring visions of the watery tarn below, the audience is coolly absorbed into the same phantasmagorical discombobulation as the visitor. Who is he? Who is she? And what in tarnation is this house? Graney’s device does not resonate as purposeless gimmickry or as commentary on sexual politics, but as sumptuous visual illusion.

Poe’s elaborate descriptions, dripping with melancholic splendor, are occasionally quite silly when spoken aloud and are well suited to Graney’s stagey sense of humor. A frantic sequence depicting the passing evenings that Usher and his Visitor spend together is a particularly clever riff on Poe’s own speedy narrative. But a few recurring motifs–the howling wolves at every utterance of “The House of Usher!” and the heightened emphasis on the words “terror!” and “beauty!”– are not startling enough to find harmony with the whole. Both the recorded wolf howls and the spoken exclamations are a touch too restrained to garner an uproarious response. However, Graney’s intelligent and energetically brisk adaptation clearly expatiates Poe’s most famous story in a manner super fun and deliciously decadent, only descending into the bowels of confusion when it absolutely must.

Hypocrites Artistic Director Halena Kays and company members Tien Doman and Christine Stulik play Usher, the Maid, the Visitor and Lady Madeline. Yes, each actress plays each role, typically more than once. Their quick shifts in costume, posture, voice and movement are astonishing in aerobic heft, yet also peculiarly appropriate for an adaptation of a book reliant largely on lofty symbolism and unraveling madness. The character changes, though initially farcical, all at once become entrancing—the joy of humor replaced by the shock of wonderment.

Kays has a natural gothic magnetism about her persona that pervades each one of her sickly characterizations. Kays’ ease with “Usher” is unsurprising as she so brilliantly directed the similarly macabre “Six Characters In Search of An Author” for The Hypocrites last season. A side effect of viewing three interpretations of a single role in an hour is the unplanned exploration of a character’s multifaceted personality—and in Usher’s case, a fractured personality. Kays’ smoky-voiced Usher is awash in curt paranoia, whereas Doman’s lets loose an imposing air of chauvinism and Stulik’s is overwhelmed by big-eyed, crippling fear. The three actresses’ interpretations of the Visitor are similarly dynamic and complementary, but the Maid—an expository fool—smartly stays the wise crackin’ course.

Any adaptation of “The Fall of the House of Usher” worth its salt must pay tribute to the story’s most terrifying character: the grand dwelling itself. Poe says “House of Usher” is a phrase encapsulating both the crumbling home and the incestuous family line–giving them equivocal weight and intrinsic kinship. In Graney’s production, the treacherous house is granted life by no-holds-barred spectacular design in the downstairs theater of the creepy Chopin. The Hypocrites, already the most reliably entertaining theater company in Chicago, with “Usher,” are experiencing a technical renaissance.

Alison Siple’s deeply hued, grandiose costumes each tell their own ornate story of loss and lust. How such liberally layered costumes are adorned at madcap pace baffles the mind and is a thrill to experience. Jared Moore’s lighting is pale and directional, allowing the costume’s colors to excitedly burst forth and giving the impression of a mile-wide vacant hallway. Sound designer Rick Sims’ original gothic compositions are as water droplets on a still pond. And Joey Wade’s two-doored set is functional, but the cracks and crevices in its many loose boards foreshadow its infamous demise. As the House of Usher falls, so too will your lower jaw. (Johnny Oleksinski)