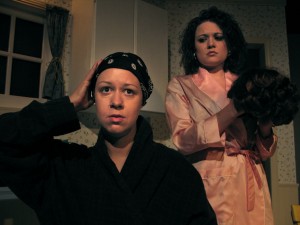 It is said that what doesn’t kill you makes you stronger, but unfortunately that isn’t always true. This unsettling subject matter is at the center of Circle Theatre’s ambitious revival of “Marvin’s Room” by Scott McPherson. Under the direction of Mary C. Redmon, this infrequently mounted work comes to life in the intimate studio space at the new Circle Theatre in Oak Park.

“Marvin’s Room” tells the story of two sisters estranged by years of misunderstanding and selfishness. Bessie (Amanda Hartley) is a woman who has devoted her entire life to caring for her sick father and feeble aunt when she is given an untimely  leukemia diagnosis. Her sister Lee (Betsy Morgan) is a woman struggling to have a relationship with her ardent son Hank (Todd Aiello), who’s in a mental institution for burning down their home. Bessie must reach out to Lee after years of silence in hopes that a bone-marrow transplant will save her life.

At times Redmon’s production feels slightly understated, but it is clear in both Amanda Hartley and Betsy Morgan’s outstanding performances that these two actresses have a clear understanding of their characters and the reality of their situation. Hartley is authentic in her every move as a woman carrying the weight of the world without being weak or maudlin. Morgan’s Lee is a brutally honest depiction of her socio-economic class, shown in her clipped speech pattern and sassy body language. Through Hartley’s graceful gentility and Morgan’s harsh abrasiveness, they both work to mend their relationship in scenes of blunt conflict and tender revelation. Bessie and Lee’s handicapped aunt is played endearingly by Kate Kisner whose sweet, child-like dependency makes it clear why Bessie has sacrificed her youth in the service of others.

Now considered a modern American classic, “Marvin’s Room” is thematically as relevant today as it was when it premiered on the stage of the old Goodman Theatre in 1990.  McPherson’s work is not afraid to ask one of the most pressing questions of illness: What does it cost to care for sick people? Written in a time when AIDS was ravaging a community, this play sought to make people think about the randomness of disease and the inevitability of death. One of the most unsettling moments in the play is the scene in which Bessie is diagnosed with leukemia, forcing audiences to ask themselves how would they react. Through it all Bessie keeps up a brave face, but it’s the strong and selfish Lee who crumbles when she returns to see the hellishness of playing nurse. Lee’s struggle shows the differences in how people cope with death’s proximity. Some run, some stay and do what’s necessary, thus posing another critical question: What’s the difference between love and obligation?

Though the play is slightly inconclusive, the meaning of love is clearly defined for this family. The conflicts between Lee and Hank are wrapped up in a heart-rending moment of silence, but the vagueness of life and death is still a question left hanging—perhaps it’s an answer we aren’t supposed to know. (John J. Accrocco)