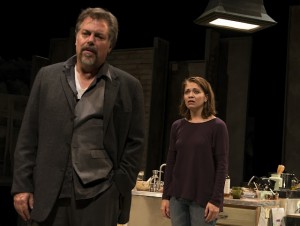 In his tightly constructed 1995 play “Skylight,” playwright David Hare has much to say about contemporary life, especially as it relates to the choices we all make: where to live, who to love and how to make a living. In this story of the very successful fifty-year-old entrepreneur Tom who, in the aftermath of the death of his wife, attempts a reunion with his former lover, Kyra, a thirty-year-old schoolteacher, Hare makes his political hay in a generally nuanced fashion. Though it’s clear that big banks and corporations are bad, even to—especially to—the unabashed entrepreneur, those who choose to live a nobler life are also suspect in motive: You’re the only one running toward the life that everyone trapped in it is trying to escape, Tom says to Kyra at one point, making a point about upper-class liberal guilt.

Brian Mani’s Tom is a force beyond nature, a bombastic man crafted with enough empathy that we can easily see how the tender and compassionate Kyra (played with a compelling mix of conviction, confusion and carnality by Greta Wohlrabe) fell in love with him. In a minor role, Christopher Sheard plays Tom’s son with just the right amount of naiveté, in a performance that holds its own alongside the acting class conducted by Mani and Wohlrabe. This show takes place in APT’s smaller, indoor Touchstone Theatre, and its relative intimacy is the perfect setting for the tightly wound business taking part within. In the best show I saw in an outstanding four-play weekend at APT, director John Langs sustained the intensity even in the quiet moments, leaving me emotionally and intellectually drained. There is one scene, where Tom is recounting his wife’s death, where an entire emotional spectrum plays out in Kyra’s face as she silently moves from stoicism to anguish to tears, a state I could not help but join. I left the theater stunned, but she had another entirely different show to do: both she and Mani had delivered topnotch performances in altogether different circumstances in the fine “Twelfth Night” the night before and, in her case, she would barely have time to catch a breath after this matinee before she’d step convincingly into the small but important role of Cassandra in “Troilus and Cressida” a couple hours hence, once again on the outdoor stage. Such is the marvel of APT.  (Brian Hieggelke)