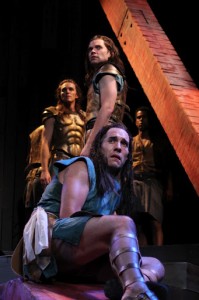 In undertaking four plays in three days up at Spring Green’s APT, the odds favored at least one dud. But on paper, “Troilus and Cressida” did not look to be that one. Not only was this the first production ever of this play for this Shakespeare-centric company, but acclaimed Chicago director William Brown was at the helm. At best, this tale of love and betrayal set against the Trojan War gave me a chance to brush up on my Greek history; at worst it challenged my wakefulness through all of its three hours. Though I was perhaps jaded by the riveting performance of “Skylight” I’d just seen at the matinee, Brown and company did little to bring the Bard’s “problem play” out of the woods. In general, the actors were fairly monotonous in their adequacy, failing to inject conversational fluency into the Elizabethan text, and the play’s action was more detached than dangerous. Boy, though, Shakespeare sure thought Achilles was a heel.

Though a better performance might have salved the work, not even a great one could save it. For ultimately, the fault lies most with the author: It’s just not a good play. (Brian Hieggelke)