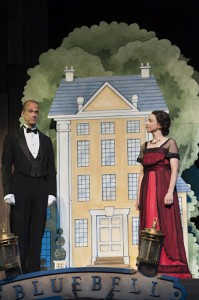 Falling, as it did, at the end of a weekend theater marathon (four plays, three days) and positioned between a sumptuous brunch and a daunting drive back to Chicago, coupled with the relative contemporary unfamiliarity of playwright J.M. Barrie’s work beyond, of course, “Peter Pan,” expectations were running low for “The Admirable Crichton” among my group of friends attending the show together. One suggested the reasonable possibility of an escape at intermission. I did not even tell anyone of my vague recollections of one of The Algonquin Roundtablers using Barrie as some kind of punching bag in The New Yorker’s theater pages, nor of my chat with the usher that revealed a three-hour show in the offing (actually just two-and-a-half hours, it turns out).

And then the rain came. The elements are a regular foe at APT’s outdoor theater; they treat rain much like a baseball game: delays, rainouts, rainchecks. We ponchoed up and hoped for the best.

And the best did come. The light showers quickly ended and the play started only ten minutes or so late. Notions of escape were entirely off the table at intermission, where my friends and I gasped in delight at how perfect this was as an end to a weekend of outstanding, but heavy, theater. One even suggested the production be lifted, lock, stock and and barrelman to a Chicago stage, in hopes that it reach an even larger audience.

The 1902 play is a social critique masked as a light comedy, wherein a cluelessly upper-crust Victorian Age lord and his family finds itself shipwrecked on a desert island. Only the butler, Crichton, has any useful skills or common sense, and the social order is soon re-ordered, with comic results. Fans of “Downton  Abbey” will find the play’s upstairs-downstairs structure familiar; in fact Crichton is every bit the proto-Carson. Director Kenneth Albers keeps things moving at a light and brisk pace, letting the near-camp quality of the material work its magic. (The theater’s tagline for the show is “Drawing room comedy meets Gilligan’s Island.”) His cast is fully on board: in addition to James Ridge’s precisely constructed Crichton, Steve Haggard’s The Honorable Ernest Woolley and Susan Shunk’s performance as Lady Mary stand just a hair above a fine ensemble cast.