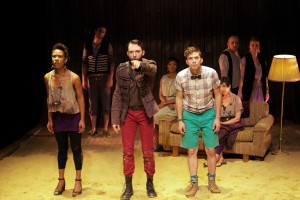 Chicago has certainly witnessed its fair share of contemporized Greek theater in recent seasons—Mary-Arrchie’s “Electra,” Victory Gardens’ “Oedipus el Rey” and The Hypocrites’ “Sophocles: Seven Sicknesses” to name but a few. However, a couple productions stand out intellectually from the phalanx. While the aforementioned list is, in fact, made up of adaptations of ancient texts originally intended for the stage, Enda Walsh’s “Penelope” at Steppenwolf Theatre and Sideshow Theatre Company’s currently running “Idomeneus” place their focus on Homeric mythological characters outside of the realm of extant Greek drama. Therein lies the rub.

You see, the predominant simplicity of Grecian comedy and tragedy is not an accurate reflection on Homer’s dense and lengthy epic poetry. No, sir. “The Odyssey” and “The Iliad” are event-laden, detail-oriented and languid efforts. So, whereas modern productions of “Medea” can shirk the responsibility of relaying winding familial lineages and underscoring the cultural importance of Jason’s famous voyage without much consequence for an audience, strictly literary mythos is undeniably more peculiar. Those stories are foreign to a majority of playgoers, typically being reserved for study in the academic sphere–perhaps “The Iliad” is lazy Sunday reading for some, but alas, not for me–and thus, when staged, absolutely require clarity of narrative. Substance over style.

Walsh’s “Penelope,” though safely and conservatively realized by Steppenwolf was, at the very least, easy enough to track. Odysseus’ wife Penelope has four suitors who wear Speedos. Done and dusted. But I cannot say the same for Sideshow’s “Idomeneus” at the DCASE Storefront Theater which, though visually rich, relaxedly sunbathes on its sandy set as the play’s overwhelmingly demure facets forego the optical boldness of the design and staging. What results is a lagging hour whose overplayed style harshly overwhelms the story. A story essentially cobbled together from three distinctive takes: Homer, Virgil, and Maurus Servius Honoratus.

“Idomeneus” becomes a confusing, however initially propulsive, experience depicting, with nifty-though-ineffectual ritualistic gesture, the return of Idomeneus (Cody Proctor) King of Crete, from war, and his apparent slaying of his own son, Idamantes (Joey deBettencourt).  Brisk deluges into Cheshire Cat monsters, godly interventions, infidelities, Idamantes’ romance with the vengeful Electra, and nicely choreographed murders are sometimes unique and well differentiated but mostly fail to coalesce.

There is much to mine in the story of Idomeneus—Mozart even wove it early in his career into a, now, standard repertoire opera, “Idomeneo”—but Roland Schimmelpfennig’s play (translated by David Tushingham), told chorally with unison speech, left me cold and at an uncomfortable distance from the action. The playwright also sprinkles in strange expletives and out-of-place self-referential humor that, while failing to contribute anything of substance, are what I recall best about the performance. 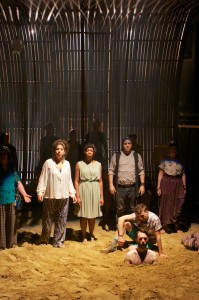 Jonathan L. Green is without-a-doubt an exciting director to keep an eye on. Having most recently directed Sideshow’s “The Gacy Play” at Theater Wit this July, Green has proven a keen sense of style and a vigorous, unapologetic aesthetic. That is more than I can say for most. But here, that style and that picturesque aesthetic are sequestered from the events of the plot, which, as a whole, are nearly indecipherable. Attractive touches such as Joe Schermoly’s beached scenic design, inhabited by an enormous cast of fifteen and accompanied by a towering arch of differently sized boards, mute essential urgency by applying complacent warmth to every moment. And Schimmelpfennig’s adaptation does not extend an olive branch.

The defining device of Schimmelpfennig’s script is shift in character perspective. Just as a storyline is wrapping up—the supposed infidelity of Meda (Susaan Jamshidi), Idomeneus’ wife, for example—another member of the chorus refutes the scene, saying, “That’s not how it happened,” and their own contradicting version plays out. The mechanism is clever in concept for a story based in oral tradition and elaborated upon by Virgil’s “Aeneid” and later Italian writers—after all, Euripides’ “Electra” is virtually unrecognizable from Sophocles’ in certain sections—but thankless in its execution. The idea of exploring alternate views of history is sound, but such textual liberties at the expense of story in order to achieve a thematic end are better suited to a piece more substantially held in the cultural consciousness. Sideshow’s take on the myth is a lovely exercise in size and splendor, but awfully muddled storytelling. (Johnny Oleksinski)