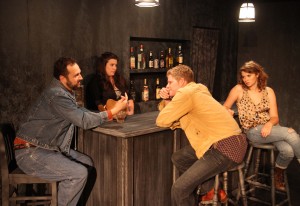 An unassuming barroom engagement between an aging, criminally minded drunk and a teenage runaway shortly becomes an intense philosophical western of tremendous ambition and execution in Signal Ensemble’s “Princes of Waco.” While waiting for a train out of Waco on the day of his father’s burial, seventeen-year-old Jim (Rob Fenton) nurses a beer and mulls over his decision with the seemingly permanent barfly Fritz (Joseph Stearns). After buying him a man’s drink (what else but whiskey?), Fritz figures Jim owes him a debt the young man cannot presently pay and co-opts him in a roadside robbery. This seemingly pedestrian event—for a western—inures Jim to both Fritz as a replacement father-figure and the general image of the “outlaw.” More importantly, it draws Fritz into Jim’s larger vision of escaping his suffocating circumstances with his sweetheart Esme (Carolyn Braver), she just as innocent until she enters the inaugural bar and meets Fritz.

What follows contains many of the classic western tropes of betrayal, weapon-drawn showdowns and irredeemable mistakes which linger in the present. This rehashing, however, should not be taken lightly as cliché or pastiche: playwright Robert Askins creates a dense plot that maintains a level of taut movement even in the most deceptively uneventful scenes. Askins also injects dark and caustic bouts of humor which consistently make audience members laugh, only for them to choke back once they realize the acidic effect of such statements. The acting ability throughout the ensemble gives the driven and scathing plot everything it could possibly need—no character remains emotionally static for long, and each is wholly up to the task of presenting complex changes over the course of years within the plot. Punctuated scenes of intense philosophical conceptualizing (a fiery eulogy by Jim for his father, a prison meeting at the cusp of a life-changing detour) give the play as a whole immense abstract depth in the vein of a great Cormac McCarthy novel. (Rob Underwood)