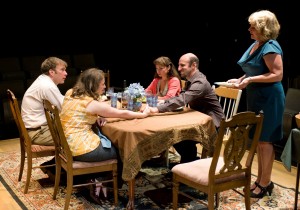 The second in a series of four plays, Richard Nelson’s “Sweet and Sad” takes as its immediate subject a simple gathering of the Apple family for dinner—on the tenth anniversary of the September 11 terrorist attacks. Nelson does well to hold this obviously significant plot point at bay for long stretches of the play, producing a much deeper exploration of American family life. To honor their dementia-ridden uncle when he’s to perform a small part in a 9-11 memorial service, three siblings, their mother and a significant other conduct the majority of the conversation. Entirely discursive, the plot quickly establishes a simmering level of frustration and awkwardness. Director Joe Jahraus employs a frenetic pace of speech and delivery which not only recreates a natural style of conversation but also hints at the importance for this family of getting through a full meal together without criticizing each other at every turn. Problematic and at times inappropriate stories are shared, and it is clear they are pulling at threads to make this work.

Scathing, almost cringe-inducing humor is utilized to great effect throughout as well, and at times we wonder how these people can be so offhandedly cruel to one another. Genial mocking is one thing, but Nelson pushes the acerbic tone far past the limits of good manners to great comedic effect. As the title implies however, the audience consistently gets an aftertaste of misery and loneliness from these moments. What lingers in the uncomfortable silence is a summation of the title: this family really is trying its best to bridge multiple gaps amongst themselves, but seem to misfire or fail completely at every turn. Bolstered by very strong ensemble performances by all involved and thought-provoking theatrical techniques, Profiles Theatre puts on a compelling show which only represents a quarter of Nelson’s total vision for the Apple family. (Rob Underwood)