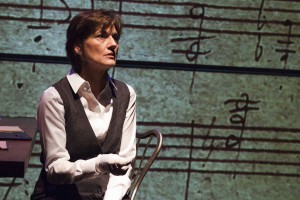 The character with the most dialogue in Moisés Kaufman’s “33 Variations” does not utter a single word—Music. Personified in TimeLine Theatre Company’s Chicago premiere production by a stationary pianist, every transition is accompanied by live piano and occasionally the gifted and stoic George Lepauw will underscore a scene. And yet, though purposely placed center stage by director Nick Bowling, the piano lends little to the play outside of informational context.

In the same manner author Dan Brown simplified and manipulated centuries of art history into thriller fodder for “The Da Vinci Code,” so too does playwright Kaufman dumb down music here to achieve his own popular entertainment. However, when the life of the play’s main character revolves around Beethoven and his compositions, forcing the music to the third chair strips away her soul. Not to mention her likability.

Sure, an exemplary, nimble-fingered pianist resides onstage for the entire performance, but the significance of music to the livelihood of Kaufman’s main character, Dr. Katherine Brandt, is never relayed to us on a level more profound than factual. But a real passion for music is the only likable facet of the character. Is there anything more joyous than listening to a passionate person speak with fire about their passion? That is where the human connection is forged. That spark of connection is the missing piece of the puzzle that takes Dr. Brandt from on-the-page character to full-fledged person, despite a mostly powerful portrayal by Janet Ulrich Brooks.

After Dr. Brandt discovers that she is in poor health, she relocates from New York City to Bonn, Germany, against the wishes of her daughter Clara (Jessie Fisher), to study the archives at the Beethoven-Haus for a paper on the maestro’s 33 Variations. “33 Variations” refers to the Diabelli Variations, thirty-three altered versions of a standard waltz written by Anton Diabelli (Michael Kingston). Diabelli originally requested one variation of his waltz from a multitude of composers, but Beethoven presented him with thirty-three—all composed while he simultaneously created his beloved Ninth Symphony. The play’s own thirty-three scenes alternate between the modern day and Beethoven’s nineteenth century, exploring different theatrical structures with trepidation. 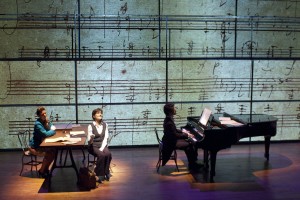 Though the Variations are believed by many to have been an effort in mockery or pompousness by Beethoven, Brandt endeavors to enlighten the nature of their creation with her research. However, when she leaves for Bonn, she leaves behind Clara and her daft, but well-intentioned boyfriend Mike (Ian Paul Custer), who just so happens to be Brandt’s nurse that Clara sparred with during a hospital visit. Her departure becomes the cherry atop decades of mother-daughter contention, and as Brandt further deteriorates, Mike and Clara move out to Bonn to assist Dr. Brandt in her final months.

As Brandt succumbs to the horrors of Lou Gehrig’s disease, the audience, though saddened by their own inevitable glimpses of mortality, still refuses to empathize with her because of her coldness—not a result of her disease, but a long-held personal attribute. She contributes meagerly to the play’s humor, the relationship between her and Clara is strained, and Kaufman renders the image of a musicologist as nothing more than a stuffy academic. Need we like every character that wanders across the stage? Certainly not. But in a play whose aim is to draw expansive, timeless parallels to many people’s lives, some relatability is desirable.

Director Bowling has staged a grid-clean production. A period-generic table resides stage right, the grand piano plays in the center, and a bed sleeps stage left. A second level is used primarily when characters are in transit, but also contributes two of this production’s strongest moments: a juxtaposition of projected sheet music to x-rays and a striking, gorgeously-sung “Missa Solemnis.” Mike Tutaj’s projections are prominently featured on Brian Sidney Bembridge’s set, and though, at times, too complicated–this play appears to have as many light and projection cues as last season’s techno-centric “Enron”—they provide decisive location change without an overabundance of physical scenery.

Through Tutaj’s projections, a choice is made to visualize America in colorful photos and Europe in mostly linear, black-and-white illustrations. Alternating with the story of Dr. Brandt, Clara, and Mike, is a depiction of Beethoven during his final days as he absorbs himself completely into finishing these variations. Those scenes, featuring a strangely miscast Terry Hamilton as a life-of-the-party Ludwig van Beethoven, have a quirky satirical quality, which the projected illustrations of Bonn complement.

But those sequences are also clumsily written with the retrospective side-glance of a future commentator. “Do you really expect Beethoven to conform to the musical conventions of the day?” says Anton Schindler, Beethoven’s assistant, played with warm respectability by Matthew Krause. Lasting until his final living moments were audience giggles at Beethoven’s worsening condition. In Bowling’s production and Kaufman’s script, that New Yorker cartoon sensibility present in the 1800s scenes bleeds over into the supposedly more grounded present day. Juliet Hart, for example, plays a ridiculous German researcher, Dr. Gertrude Ladenburger, admittedly without a sense of humor, who, after months of rigid acquaintance, finally begins warming up to her American compatriots.

Kaufman’s ideas are nothing if not valiant and heartfelt—Live life to the fullest in the present moment!—but he convolutes them with an overlong, overbearingly constructed, and hollowly sentimental story. And along with Kaufman’s earnest—though noticeably reminiscent of Stoppard’s “Arcadia”–intent, TimeLine’s production of the play is equally sweet and well meant. But the kindness this production imparts is distinctively separate from the tepid impression left by the characters and the play. “33 Variations” preaches of unity and the ties that bind–but the many disparate elements of Kaufman’s play couldn’t be more isolated. (Johnny Oleksinski)