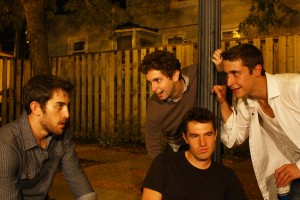 Outdoor theater is fun but has its drawbacks; the most talented ensemble  fights for its life against ambient distraction. “Ah fair Imogen, my life, my wife… THIS IS THE ROUTE 50 DAMEN BUS.” Between the cicadas and the sirens, RIFF Collective faces serious challenges.

And against the odds, they succeed in a raggedy, charming way. It’s theater at its most basic, and that’s a compliment. The set is non-existent, the lighting, props and costumes are minimal. Shakespeare’s script is not his best; act one’s hefty exposition is clunky. There’s some confusing double- and triple-casting. The stage manager had to kick a passerby off the king’s throne.

But the ensemble has a handle on the language, chemistry and intention; ultimately, that’s what puts Shakespeare across. (Lisa Buscani)