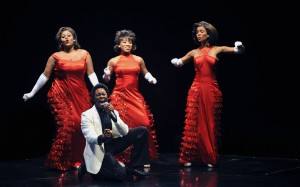 Although the show itself originally opened more than thirty years ago, “Dreamgirls” has had remarkable staying power, particularly since the 2006 film version that won an Oscar for Chicago’s own Jennifer Hudson and a remarkable national tour revival that blew the roof off the Cadillac Palace Theatre in 2010. As such, expectations were high for the first major regional production of the show since the newfound interest, particularly since Hudson herself is a Marriott Theatre veteran.

Unfortunately, Marriott’s current production is a disappointment on a variety of levels. Director and choreographer Marc Robin does not by and large call upon his cast to either sing or dance compellingly, which really bogs down the show.


When characterizations call for two of the three members of the trio being spotlighted to have specific qualities to their voices and those qualities are not there, the show’s narrative suffers. Effie, for instance, is admonished early on for her having to stand out in the group sound, and Deena’s voice is described as bland but eventually comes into her own when Deena is forced out. And yet, the vocal qualities of these characters remain the same throughout the show, even during their big solo numbers where for instance, Effie ran out of steam and cracked a note on opening night during the Act I finale. They each had better luck with the show’s ballads. 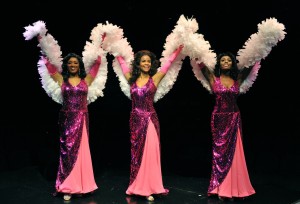 Reliable pitch remained a problem for most of the principals—especially in the long recitative sections that carry the action forward—as was executing the proper rhythm and syncopation of the musical styles called for in the show. Not helping things was a band that aside from a killer bassist, had little feel for the music. A notable exception was Eric LaJuan Summers as James “Thunder” Early who stopped the show a couple of times with his extraordinary singing and dancing. However, even that is at odds with the plot as the Dreamettes, as they’re originally introduced, are supposed to overshadow him as his career heads south. Here, he remains the most engaging element of the evening. (Dennis Polkow)