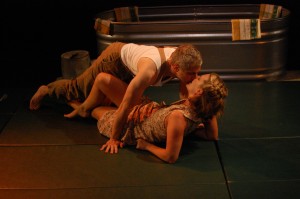 The abbreviated length of New Zealand playwright Gary Henderson’s “Skin Tight,” being given a Chicago premiere by Cor Theatre, resonates long after the “quardle oodle ardle wardle doodle” is done. Those five nonsense words, both muscular and ambivalent, come from poet Denis Glover’s similarly brief rural work, “The Magpies,” on which “Skin Tight” is based. In Glover’s six four-line stanzas, those are the only words that the poet’s subjects, Tom and Elizabeth, speak. But they certainly speak volumes. They echo a relationship’s highs and lows, and understand their universal commonalities. The emotions, no matter the context, are deep and extreme.

Akin to Glover’s physically tiny work, “Skin Tight” runs a mere fifty minutes, but the subject matter is contrastingly massive. The drama, directed by Victoria Deiorio, depicts the lifetime events of a relationship, which, while a formidable task, is not a theatrical first. Comedic one-acts have long taken up similar challenges, but too often with an abundance of cheap laughs and stereotypical representations. Henderson’s play, alive with an obscure poeticism, endeavors a more honest exploration of the joys and pitfalls of coupledom.

“Skin Tight” holds different meanings for every person. For me, this gem quite accurately reflects a single average day for a couple—its fights, lulls and rushes of passion—only with the theater’s harrowing urgency and perpetual threat. The spoken scenes abound with intimacy and lyrical nuance and are punctuated by fights unbelievably dangerous to the observer. Risk in stage combat takes extreme skill to approximate without the movement being truly hazardous to the performers, but movement/fight choreographers Julia Neary and Scott Cummins have accomplished guttural, heart-pumping confrontations that arouse shock and continuous surprise.

Early in the play, Tom (Tony Bozzuto) eats an apple, slicing into each piece with a finely sharpened knife and biting the slice directly off the blade—the juice gushing sensually down. It’s a deliciously provocative image that abstractly mirrors the risks taken and the pleasures derived from a relationship. But that is not the last we see of that oh-so-sinister knife. During another booming fight—given rhythm and thunder by Lindsay Jones’ sound design—Tom puts the knife directly into Elizabeth’s (Tosha Fowler) mouth, and they move together in a terrifying act that makes tight-rope walking seem carefree and innocent. There must be a trick to the maneuver, but being, perhaps, four feet from the actors, I couldn’t discern any holes in the illusion.

The intelligence of the fights on both the part of the playwright and the choreographers is most apparent during the moments of serenity immediately following the chaos. Even when shrouded by Henderson’s image-laden verbosity, Bozzuto and Fowler retain believable, burdened personas that bleed vulnerability—sitting together on the unforgiving ground and simply being present. Though confined to farmland reminiscent of Eugene O’Neill’s rocky settings and, though speaking with rich formality, Tom and Elizabeth are respectively an everyman and everywoman. The difficulties of their lives—Elizabeth’s infidelity, Tom being at war—are commonplace, domestic problems, but they are presented with the titanic dynamism of style that such existence-altering events deserve.

The final stanza of Henderson’s play as directed by Deiorio comes perhaps too speedily for its significance to be felt as strongly as the playwright intended. “Skin Tight” ends on a moment of full nudity that, while not-at-all gratuitous, does not bring about completion or rebirth, so both the finite and cyclical sensibilities of the piece are left unattended. However despite the race to the finish, the unpredictability and heat of Bozzuto and Fowler’s performances create “Skin Tight,” a genuinely moving adrenaline rush. (Johnny Oleksinski)