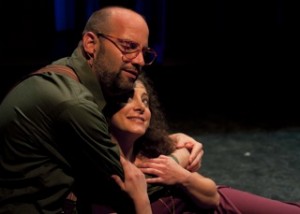 For a show whose star is dead before the curtain rises, “A Class Act” is a lively tribute to one of Broadway’s greatest composers. Porchlight Music Theatre kicks off its eighteenth season with the regional premiere of this 2001 Tony-nominated musical.

Under the direction of Stacey Flaster, “A Class Act” tells the life story of Edward Kleban through his own music, pieced together years after his death by Linda Kline and Lonny Price. Edward Kleban (played by Bill Larkin) was famous for penning the lyrics to the Pulitzer Prize-winning musical “A Chorus Line.”  “A Class Act” shows his struggles with mental illness and eventually the oral cancer that took his life in 1987.

The music is wise in its old-fashioned approach and the tight choral harmonies inspired by music director Beckie Menzie sound spectacular in the cozy studio space at Theater Wit. Kleban’s circle of friends serve as a Greek chorus, many of whom give stand-out performances in character-revealing solos. Dana Tretta in the role of Lucy (one of Kleban’s love interests and closest friends) proves that she not only moves audiences with her soaring voice, but also emotionally grounds her scenes. Though this is a show about the pangs of creativity and the tribulations of success, the book sounds more like a sit-com, with some of the most charming comedy delivered by Jessica Joy in the role of self-involved Mona (another of Kleban’s love interests and closest friends).

Time and again Porchlight demonstrates their careful attention to aesthetics and “A Class Act” is no deviation. The meticulous detail of Porchlight’s creative team is quite literally all over this vivid staging. Some of the most satisfying surprises are created by Angela Weber Miller’s highly visual set.

The book itself, however, is problematic in that it moves too swiftly through the episodes of Kleban’s life. At times, it seems even the actors are having a hard time keeping up with the severe emotional arcs and this tends to impact character development. The abundance of one-line quips make the dialogue fall flat in a few places, which is often overcompensated for with predictable sentimentalities. The result is somewhat unfitting to Kleban’s deeply felt arrangements.

Larkin’s sprightly interpretation of Edward Kleban displays a lot of hope, which is the very theme upon which this show hinges. “A Class Act” makes astute points on the life of an artist and the inherently complicated ways in which people create. In the end Kleban’s struggles to succeed are justified in his post-mortem realizations about fame and artistic integrity. (John J. Accrocco)