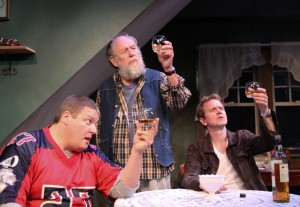 Has-been football players Roy (Howie Johnson) and Cody (Steve Key) find themselves outside Wallace’s (Dennis Zacek) house when Roy’s POS Chevy breaks down. Roy is convinced Wallace is the referee responsible for the game-losing call that spoiled their championship season and ruined their lives.

Playwright James Still’s implausible narrative plants seeds for conflict but doesn’t deliver. Story threads are introduced (Cody meets an old flame; Cody, who is gay, has a crush on a classmate) and never fleshed out. Instead, Still layers on the hopelessness, the standard characterization of the working class these days.

Johnson makes a fine teabagger dolt, steeped up to his ears in nostalgia. Zacek deftly handles Still’s awkward efforts at the abstract, while Key does what he can with a character who doesn’t know what he wants, where he’s going or why. The script’s bleakness is its most disappointing feature. The grunts are tougher than that. (Lisa Buscani)