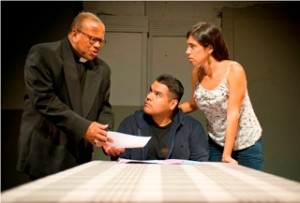 Seemingly ripped from the headlines, “After” at Profiles Theatre tells the tale of a falsely accused man after he’s exonerated and released from prison. “After” is Profile Theatre’s second show this season and a Midwestern premiere for Chad Beckim’s 2011 play. Presented in the intimate new Alley Stage, this ninety-minute pressure cooker is sure to move audiences and will certainly get better throughout its run.

When Monty (J. Salome Martinez) is released from a seventeen-year prison sentence, he must start his entire life over again. In bouts of silence and awkward tiptoeing, Monty and his sister Liz (Alice Da Cunha) attempt to put their relationship back together.  Susie (Stephenie Park) is a charismatic but troubled drugstore clerk who begins to open Monty up,  showing the fragile nature of a man stunted at age seventeen by an unimaginable injustice.

Chad Beckim’s observational dialogue highlights the different ways in which people use too many or too few words when bridging the uncomfortable. Beckim’s script does an interesting thing: He relies on objects to spark convincing storytelling. A toothbrush inspires a whole scene, indicating the story potential in the everyday. By restricting the world of his play, Beckim skillfully navigates the themes of race and class without ignoring them completely. “After” occasionally loses focus, but the revelatory details leading up to Monty’s emotional catharsis suggest he won’t find freedom until he can push past the ways prison estranged him from society. Monty also questions whether he can forgive himself and his accuser, an answer Beckim thoughtfully leaves ambiguous.

Director Matt Hawkins’ cast appears to have spent a lot of time with these characters, resulting in a strong sense of emotional authenticity.  J. Salome Martinez as Monty has the honest face and wounded disposition that makes his eventual breakdown all the more tragic. Liz’s compassion ebbs but she fearlessly attacks when provoked in scenes of edgy conflict. By far, one of the most fascinating performances is given by Stephenie Park as Susie, the helpful drug store clerk and later love interest of Monty. Park begins the play endearingly naïve, and ends it a brutalized prisoner of her own making.

Beckim’s riveting drama shows how everyone creates their own kind of prison, some more literal than others. “After” is a play about finding the redeeming qualities in life and the torment of dwelling on that which can’t be changed. Sometimes, bleak and maybe at times a little unbalanced, “After” is a play that resonates in passages of intelligent dialogue and intensely felt conflict. (John J. Accrocco)