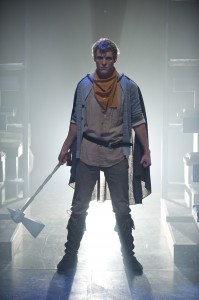 Wizards. Pirates. Vikings. Politics. Tracy Letts voicing a giant dragon. The first show of the House Theatre’s eleventh season is nothing if not ambitious. Striving to be epic, playwrights Chris Mathews and Nathan Allen (who also serves as artistic director of The House and director of this production) have sought to cram a multitude of themes, characters and backstory into the two-and-a-half-hour part one of the “Iron Stag King” trilogy. Intertwining the legends of King Arthur with early American politics and fantasy sensibilities, the story follows storyteller Hap the Golden (Cliff Chamberlain) as he leads a stalwart (if unsure) young man (Brandon Ruiter), a team of warriors and a fanboy (Ben Hertel, providing ample comedic relief) to reclaim a magic hammer and thus the crown of the land. With seating arranged in an arena-like square around an open set allowing for four entrances and exits, the action sequences are thrilling and immediate. Likewise the costumes (Melissa Torchia), lighting (Sarah Hughey) and puppetry (Lee Keenan) are captivating and often eye-popping. But much of the plot development is unfortunately slow and stilted. The result is sometimes a bit like riding a roller coaster with incredible dips and turns at only ten miles an hour. (Zach Freeman)