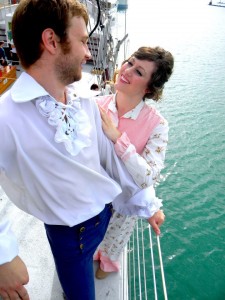 Messrs. Gilbert and Sullivan are rolling in their distinguished graves. And rolling more aggressively than ever before, thanks, in no small part, to the theaters of Chicago. A guidepost of Victorian theater, the duo’s “The Pirates of Penzance” has been performed in and around our fair city over and over again these past twelve months, and in any and every orientation but ye ole proscenium arch. Last spring, the Marriott Theatre, by spatial necessity, presented the work to great acclaim on their round stage. Likewise, but not-so-likewise, The Hypocrites, the last two years and coming up on a third, have performed the operetta in promenade style affront a backdrop of a hipster beach party. And now, perhaps most brazenly, the Tall Ship Windy has “Penzance” actually leaving port aboard a functional vessel.

As far as I am aware, the Tall Ship Windy’s production, their first musical stage outing, is the only time “Penzance” has ever been performed aboard a genuine sailing ship–at least on the Great Lakes. I am quite surprised it took so long. Since Wilford Leach’s 1980 New York Shakespeare Festival production, which landed the operetta a newfangled musical theater sensibility and a swashbuckling attitude, “The Pirates of Penzance” has placed a great deal more emphasis on its piracy than it did in 1879. Where once the fearsome fops “poured o poured the pirate sherry,” now they gutturally “arrrrgh!,” sword fight and guzzle down Caribbean rum. Driving the “yo ho” home, the Pirate King in Ethan McSweeny’s production at the Stratford Shakespeare Festival this summer was a dead ringer for Johnny Depp. What is lost in these imaginings, however, is the satire. After all, the scary, but dimwitted pirates are, in the end, revealed to be nothing more than hereditary peers having a bit of fun on the shores of England. Yes, “Pirates” takes place entirely in England.

Watching “Pirates of Penzance” aboard a boat is an incomparable experience. I had never before witnessed an open-air production on water—cruise ship variety pulp does not count. And you’re not lamely docked either. The Tall Ship Windy goes a ways into Lake Michigan, affording picturesque vantages of the city’s skyline. Admittedly these are the cheapish thrills elicited from any site-specific theater, but that, by no means, should devalue its effectiveness. Despite that seafaring joie de vivre, though, there is a storytelling caveat to this ninety-minute boat trip. “Penzance’”s plot begins aboard a pirate ship, with the young Frederic (Stephen Boyer) leaving behind his criminal upbringing for greener pastures on his twenty-first birthday—his father, in Frederic’s youth, having mistaken the pirates for pilots. But that on-ship setting is short-lived—most of “Penzance” takes place on land—and the changes of location aboard the Tall Ship Windy often lack coherence and are the predominant cause of any confusion “Penzance” novices will undoubtedly have.

But the play’s no longer the thing. Modern productions of “Penzance” frequently choose to sacrifice the plot and lyricism in order to facilitate a specific environmental experience. And that is precisely what directors Emma Couling and Jessie Mutz have done here to mostly winning effect. Couling and Mutz, apart from a perplexing and overcrowded final chase scene, have taken advantage of the Tall Ship Windy with extreme intelligence and ingenuity in their staging—pirates climbing up masts, Mabel’s hair and dress cinematically blowing in the wind. And given the goals of this production—produced by a commercial ship—experience is everything. Some plot holes are to be expected, and, for the most part, do not diminish the joys of the voyage.

What strikes me most about this “Pirates” is not its formidable ship, however, but its adorably scrappy band of players. The ensemble is certainly not the best sung I’ve ever heard and 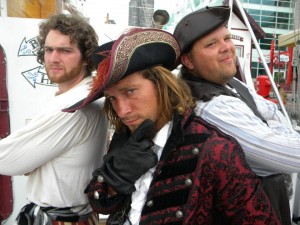 sadly misses the crisp lyrical clarity of Gilbert and Sullivan’s songs. The acoustic deficiency of open water is a harsh mistress. But the cast relays their enthusiasm and positive intentions in a manner pitch-perfect for a non-traditional theatergoing audience—as one will discover on the far edges of the pier—and remarkably charming to a frequent playgoer as well.  The singing voices of a few major players—Frederic, Mabel (Michelle Perkowitz) and the Major General (Brian Elliot)—are strong particularly given the unpredictability of their surroundings.

Boyer makes for my favorite Frederic in recent years with his sincere portrayal and correspondingly sincere singing retaining a supple dynamism rarely seen in the robustly performed role. He pairs nicely with Perkowitz’s sweet, submissive Mabel, the Major General’s long-winded daughter. Boyer embraces Frederic’s naive sarcasm with glee while Perkowitz, in reaction, becomes his wide-eyed, wilting damsel. The Pirate King, Orion Couling, is equal parts debonair and daft, and it is thrilling to witness him dangerously walk the edges of the ship and swing from its ropes as only the artistic director of the Tall Ship Windy can. And the rest of the impressively large cast wholeheartedly embraces their watery surroundings, making for a ragtag and especially atmospheric “Pirates of Penzance.” (Johnny Oleksinski)