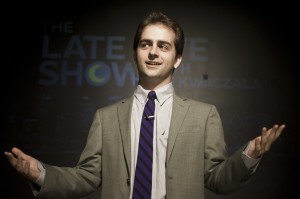 A fast-paced, sixty-minute comedy show that mostly follows the late-night talk-show format—but with eccentrically dark edges—”The Late Live Show” has an inspiring air of DIY ingenuity, from the guest couch balanced on bricks to the laptop used as a teleprompter. Along with sidekick Joe McAdam, host Joe Kwaczala (and a team of clever writers, focused audio/video technicians and quick stagehands) delivers a quality hour of comedy in the relatively tight quarters of the Cab theater at Stage 773. Featuring an introductory monologue embedded with jokes about current events, short features like a phony (and hilarious) Facebook feed and a few character pieces, along with a well-amplified musical guest and an interview with a (typically local) person of interest, it’s easy to forget that this isn’t actually a television show (especially with cameras filming from three angles at all times). Throughout, Kwaczala’s subdued delivery and adeptness at turning his sometimes acerbic wit into comedic charm is impressive. “The Late Live Show”’s fifth season may not have them in a particularly “late” timeslot now that they’ve moved from midnight up to 8pm, but their offbeat brand of comedy still remains. (Zach Freeman)