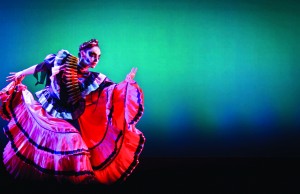 Truth to power comes in many forms. For John Jota Leaños, one subversive medium is children’s animation, where alphabet songs and Western fairy tales become vehicles of satire and critique. Leaños, however, isn’t preachy or self-righteous; ironic humor and street sensibility lend wit to the message. His Mariachi-scored history lessons on Imperialism would be welcome additions to the common curriculum… imagine third graders on the swing set at recess singing “T is for the Territory of Western Civilization.” These animations, along with choreography by Joel Valentin-Martinez, music by Cristobal Martinez and Mariachi ensemble Los Cuatro Vientos come together in a four-act “opera muerta” in which the dead question the crimes of The Man—from border control to Abu Ghraib to environmental devastation and neglect—with lively musical numbers. The MCA will also exhibit “El Muertorider,” a tricked-out 1968 Chevy designed by Leaños and Artemio Rodriguez in honor of West Coast lowriding and commemorated to the victims of Hurricane Katrina. (Sharon Hoyer)