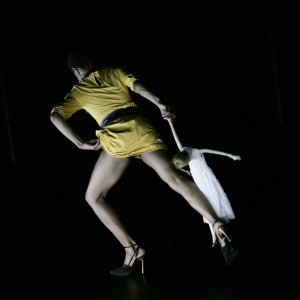 Chicago has, over the last decade, become an epicenter of world-class dance, both as creative incubator for new and established companies and—thanks to a half dozen high-profile venues and as many outreach-minded organizations—as magnet for visiting artists across the country and the globe. Yet it’s rare that choreographers based in Africa showcase their work on the third coast. Happily, the Dance Center of Columbia College is opening their season with two programs of work by independent female choreographers from five African nations—artists who have received broad acclaim in continents across the pond, but have been rarely seen in the United States—entitled “Voices of Strength.”

A solo by Nadia Beugre from Cote d’Ivoire entitled “Quartiers Libres” begins with a song that grows louder, more guttural, more desperate as she works her way through the crowd in a silver mini dress and high heels, belting into a microphone looped a dozen times about her neck. In the course of the piece all these constraints will eventually come off—shoes, dress and cable—in slow, hyper-attentive moments that unfold out of time. Beugre’s physical presence commands the stage, particularly in confrontational moments of stillness when she returns the audience’s gaze. The slow, process-based segments are punctuated by moments of kinetic explosion that heighten near the conclusion of the piece, when the sound and texture of plastic, enveloping Beugre inside and out, become as important as the movement of the body on stage. This is performance art at its best.

Presented alongside “Quartiers Libres” is a theatrical collaboration by Kettly Noel from Mali/Haiti and Nelisiwe Xaba from South Africa. Their hour-long piece “Correspondances” is a playful, fierce and personal reflection on femininity. The first scene opens on Xaba in stilettos and a long, elegant robe, describing her morning routine and the series of mirrors she consults before leaving the house. Xaba is a coquettish and charming comedienne, pantomiming the shape and location of objects in the room and striking exaggerated runway model poses. Her first encounter with Noel is at once pantomime, contemporary dance and slapstick routine: sassy hip waggles turn into disco-y hip bumps, then into combative, sumo-like blows. Each scene is a fierce and witty playlet: there’s an ingenious puppetry dance with a little blonde doll, an eighties music-video segment, a passionate monologue on womanhood delivered in French and a funny, scathing critique of ballet and European dominance. Shortly after South African Xaba tells Haitian Noel she doesn’t speak French, she picks up a microphone and delivers ballet commands to Noel who performs literal translations of the actions with a passel of white baby dolls strapped to her back—gathering spilled dolls when told to “assemble,” karate-chopping them when told to “coupe.” All builds to the finale: an erotic, visceral, disturbing feast. 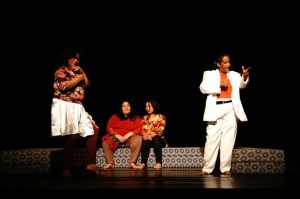 From Morocco comes Bouchra Ouizguen and her haunting, ritualistic “Madame Plaza.” The piece begins in near silence, a few irregular clicks marking the passage of time as four women in common clothes lounge on large, rectangular cushions. They seem bored, shifting and changing positions listlessly. There is little sound, little action from these women. The slimmest and youngest of the quartet is Ouizguen. She performs with three traditional Aita vocalists—an ancient form of Arabic music dating back to the thirteenth century. The first wailing incantation, many minutes into the piece, shatters the air. The still atmosphere makes each lush hand gesture by the vocalists monumental. Watching Ouizguen’s piece stirred in me a sensation of otherness familiar from the writings of Paul and particularly Jane Bowles—a strange, lazy brew of bafflement and seduction, a desire to slip into this world of women so different from the ones I know and crack the code of their bond forged in silence. And yet the wailings of the Aita singers communicate an unmistakable longing that bypasses language barriers and speaks directly to the soul.

“Sombra” by Maria Helena Pinto from Mozambique takes place on a stage lined with overturned black buckets. Pinto, dressed in black, wears one on her head that shrouds her visage and sometimes serves as a hindrance she battles, sometimes as a burden she bears without effort, walking the path of buckets with ease. Sadly, my preview video was damaged and I only was able to see the first few minutes of Pinto’s piece, but it will be a treat to have surprises in these evenings of powerful, compelling performances.