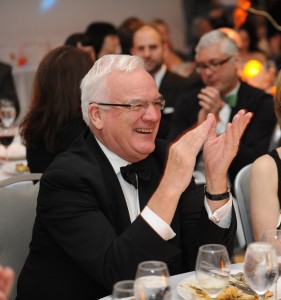 It is a late August day, and Brian Dickie is nursing an iced coffee at a North Side café while reflecting on his thirteen-year tenure as general director of Chicago Opera Theater. He would be heading home to his native England in a couple of days, “hopefully” coming back for the company’s production of Mozart’s “The Magic Flute,” which is his final production and opens Saturday, September 15.

Tell us about your final production.

The first thing to understand is that we were to have done this with Jane Glover and Diane Paulus, the production that Diane had done for the Canadian Opera Company. When push came to shove it was too big and too expensive. The number of people that it needed to stage manage it were double the normal amount. Some of these elements would have to be modified, which is an additional expense. We knew this well in advance so we thought that the best thing to do would be to get together some people that could do a production within the scale that COT normally has.

Was the possibility of Diane Paulus remaining part of the creative team ever explored?

We didn’t really explore that but knowing Diane as I do, it would have been a pointless exercise. Her availability and schedule were based on a revival of an existing production rather than doing something from scratch. Once she became director of American Repertory Theater at Cambridge, Massachusetts, she became frantically busy. She also had two Broadway shows, “Hair” and “Porgy and Bess,” so one way or the other, the poor woman was stretched.

As far as Jane was concerned, she would have been prepared to do this, but it became an easy thing to say, “Look, since Diane is not doing it any longer, I’m trying to write a book on Handel and I am really late and I need an extra couple of months to devote to that.” We knew this a year ago, so what we have done is not exactly a last-minute solution. So, we put together a new creative team that has a marvelous design and is very effective. The point all along was to continue the line of doing Mozart in a different way it is done on across the other side of the Loop. This is an East Loop version, theirs [Lyric Opera’s] is a West Loop version. This one is newer. We had success with the three Mozart/Da Ponte and “Clemenza,” so I thought winding it up with the “Flute” in English would be a good thing to do.

The irony is that for COT’s first quarter-century plus, all of its productions were done in English.

Yes, “Orfeo” was the first in October of 2000 and everything has been done in its original language ever since. But as a singspiel, “Flute” doesn’t derive as much benefit from being done in the original language as say, “Traviata,” “Figaro,” the Da Ponte operas. And in this case, that makes it distinct from seeing it in the Wild West Loop. So we’re doing it in English as an alternative. Lyric did it last year. Ravinia just did it. Sometimes it goes like that. Then it won’t be done again anywhere for ten years.

Were casting choices limited by singing it in English?

Theoretically it could: too busy, can’t be bothered to learn it in English and turn it down on those grounds. But in this case, it didn’t. Casting is not a process of writing down a list of names and flagging down all of those names. What you do is sometimes you get your first choice, which is certainly the case for our Pamina and Tamino. That’s the goods. We got an absolutely marvelous Papageno, but it wasn’t our first choice. Sometimes you realize that your second or third choice turns out to give you a better result than what would have been your first choice, a better balance of personalities that work well together.

Looking for cast chemistry seems to be a hallmark of your productions.

It is. In the vast majority of cases, not specifically at Lyric, there is a bit of a committee process at work there. There are some exceptions to that of general directors that don’t pay attention to committees. In the last decade at Glyndebourne when I was there, that was how it was. Of course, you discuss these things with the conductor and the director, but if you actually take charge of the process, you are better informed. You make it your business to know all of the possibilities. Something has to lead to process. Conductors are notoriously bad at it. Bernard Haitink used to say, “When you say this is the right choice, we go with it.” There needs to be trust, respect and understanding, attributes that are very important to a particular conductor and director in combination. It is not just a matter of what I think, but I am well enough informed of a large number of singers with whom I am acquainted and match them to each other, to the opera and to the rest of the creative team. It does no good for me to say, “Let’s do this and that.” And at COT, we don’t have enough money to be buying singers out of the catalog. Those are the ones you already know and are priced accordingly in the farmer’s market.

Did you have a say in who your replacement would be?

I didn’t. The incumbent is rarely consulted. Nor should he be. The board has to make its judgment and they may want something different. Or something the same. One board member allowed a slip of the tongue, “What we really want is something like you, only better.” Yeah, very good thinking. We all have our strengths and weaknesses. Someone with all of my strengths and none of my weaknesses. Inarguable, isn’t it?

How did they do, in your judgment, selecting Andreas Mitisek?

I have no particular opinion. I think the point is that they were extremely satisfied with their choice. It fulfilled all kinds of measurements they were concerned about, so that’s fine.

Did you know Mitisek’s work?

I haven’t been to Long Beach since his predecessor was there, Michael Milenski.

From what you know of Mitisek, what similarities and differences can we expect?

Put it this way: what I tended to do over the last thirteen years is to do strands of work. One would be the twentieth century: Britten operas, John Adams, Bartok/Schoenberg double bill, and so on. The other strand would be early music, Monteverdi, Handel, the Medea triptych, and so on. In the middle is Mozart, of course, which is very important to me. And also to do interesting things like Beatrice and Benedict. I tend to look at the repertory of a company in rolling three-to-five year periods rather than just ad hoc. Strategically, that’s a good thing to do but that does require more solid financial footing than we had. It was always a challenge to keep to those plans despite some real financial stress throughout my time. I inherited a financially stressed company and one of my great failures was to not change that sufficiently. We’ve been through such horrible times the last four years, all companies have.

You could not keep what you were about and play it safe the way that Lyric did.

No, it wouldn’t be consistent with the primary objectives of the company. It’s been a challenge and will be for Andreas as well. On the face of it, it looks like his interest is more twentieth- through twenty-first-century new work. To that extent, we’re different. I look at the whole operatic repertoire and consider that all periods are important. But it’s perfectly valid to concentrate on other things particularly if you haven’t got enough money. Small scale things, new works.

With the long-range planning necessary in opera, how much of the upcoming season did you plan?

I planned something completely different. The only thing he retained that I had planned was the Verdi. Next season we would have celebrated the bicentennials of Verdi and Wagner and the centennial of Britten. Only Verdi survived and was retained, largely because it was part of the so-called People’s Choice and money was given so that it would be mounted. It would have been tricky for that to be abandoned. He has come in and quite understandably, might have had problems executing the plan I had laid out.

Will you be paying attention to what happens at COT now that you’re leaving?

Of course I will be. I was at Glyndebourne for twenty-seven years and keep up with it twenty-three years after I left or whatever it has been. I watch it closely with great interest, so I can’t imagine I would lose interest in COT. They would have to do something pretty dramatic for me to not want to pay attention. But I am seventy-one, I have nine grandchildren now, four children, all kinds of friends, and so on. I’ve done my bit and it’s time for somebody else to take it forward, as I’m sure they can. And I hope they will.