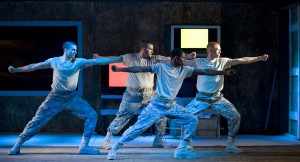 The onslaught of modernized Greek tragedy Chicago has played witness to this year has consisted largely of caked-on, imposing stylistic touches, absent of purpose or urgency. To be sure, there is a strong helping of such flashy accessorizing in director David Kersnar’s overstuffed production of playwright Charles Mee’s “Iphigenia 2.0” at Next Theatre as well, but here, Mee is nothing if not purposeful. A few productions in that aforementioned group uncovered relevant drive and meaning without resorting to on-the-nose modern day parallels, as “Iphigenia 2.0” does, but still, none were screaming quite so loud as Mr. Mee. But, as evidenced by Next Theatre’s new production, the playwright’s deafening cries go unheard.

Mee’s already cluttered commentary on our modern wars—specifically those in Iraq and Afghanistan—is rendered even more base and unpalatable by Kersnar’s loudmouthed production, which chooses to overemphasize the playwright’s undue focus on Generation Y’s consumerist tastes over Agamemnon’s (a stoic, unmoved Aaron Todd Douglas) capability as a leader and as a father. Agamemnon’s decision as to whether he must sacrifice his daughter is pushed aside in favor of the playwright’s social dogma. What occurs is less of a tragedy and more of an elaborately staged anti-everything pamphlet.

Contained within Rick and Jackie Penrod’s wood-and-metal box plastered with distracting television screens, the play retains its flattened characterizations and manipulative dialogue throughout an intermissionless ninety minutes. The bevy of stereotypes and hateful characteristics imposed upon the characters undermines the tragedy, which is nowhere to be found. Most prominently featured are a group of four twentysomething soldiers (Luce Metrius, Wesley Daniel, Erik Strebig, and Max Fabian): obsessed with violence, oversexed and observably daft. The soldiers, well realized by the four actors, move with coolly choreographed, dangerous precision that punctuates their choral text, but the movement, itself, proves far more interesting than the words it seeks to embolden.

Three young girls, Iphigenia and her two bridesmaids (Ariella Marchioni and Alexa Ray Meyers), are portrayed as the quintessential consumer, choosing anything and everything frivolous over that which is meaningful, substantive and real. All of these actors perform their roles well given the insurmountable constraints they face, with Rebecca Buller’s Iphigenia and Laura T. Fisher’s vulturous Clytemnestra appearing most at ease. The characters are all uniformly detestable—the cast given the unfortunate task of embodying most of society’s vices. Iphigenia gives into her father Agamemnon’s wishes for her to become a sacrifice to the god Artemis largely in an effort to do something meaningful with her life amidst the rampant materialism. “What would you have me do, mother? Stay at home and make a decision about the draperies in the bedroom? Or get a job in some law firm? Or do social work? Or try to preserve the environment?” Mee’s entire play is written with that same authorial contempt and breathtaking condescension.

The young characters snap cellphone pictures, fiddle with iPads, play Dance Dance Revolution, rap and commit a bacchanal’s worth of debauchery for the entire play. They bring little to the drama outside of shimmer, and act only as hollow shells for cultural traits. Iphigenia’s upcoming wedding to Achilles (Nick Vidal) takes on the excess and loathed entitlement of  “My Super Sweet 16,” and through the choice to costume the characters as present-day Americans, these representations end up unfairly generalizing a large, diverse subgroup. American youth is envisioned as victimized zombies who let society’s downward twists and turns make their decisions for them. As a card-carrying member of Generation Y, I did not feel offended, but I did feel considerably unwanted.

Perhaps the most politically charged choice is the character of Man, called Old Greek Man in Mee’s script, but made a Muslim in Next’s production. The altered cultural and religious affiliation becomes clear when Man lays down a prayer mat early on in the play. Mee has the character do nothing textually but wipe the scrawled word “Agamemnon” off a wall during the preface and speak to the audience in Greek at the play’s center. But Next’s production expands the role without regard for fact or consequence into some sort of indentured servant. This man is inexplicably at the beck and call of all of these characters, being forced to carry bags, do menial tasks and hover in the background. In Mee’s play, Man is not the conflict’s victim or perceived enemy—he is Greek just like Agamemnon, Iphigenia, Clytemnestra and the rest. This change-up only further confuses the already confused.

The final scene ends as Agamemnon is holding the bloodied corpse of his dead daughter with the standard ringtone of an iPhone. How rude! At first, the phone sounds as though it’s coming from the audience, eliciting judgmental glares and above-it-all sighs. But the ring’s volume continues to grow and grow until it becomes clear that it is actually a part of the production. Mee did not include the cellphone noise in his play, and neither should Next. Reducing the sprawling human themes of Greek tragedy and our wars at home and abroad to the interruptions of a mobile device is tawdry, at best. That single moment of elitism—the same kind of smug elitism that has audiences looking outside of the theater for their entertainment and satisfaction—summarizes the entire production. (Johnny Oleksinski)