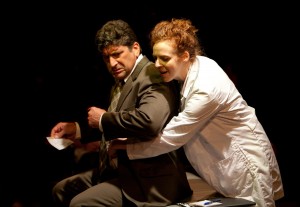 Emerson once said, “I hate quotations. Tell me what you know.” Someone needs to tell playwright David Hirson; his attempt to dramatize artistic struggle sounds like an over-long reading from Bartlett’s.

Classics-quoting literary bastard Henry (Richard Sandoval) bets his ex-wife’s (Julie Partyka) successful playwright boyfriend (Michael Dickson) that he can write and produce a play in six months. The wager sends him to a new play festival and introduces him to a motley crew of acting stereotypes intent on making him a better man and artist.

They don’t. Hirson’s protagonist is so arrogant that we don’t care if he finds satisfaction. The premise that inaccessible poetry is purer than theater is deeply flawed; these days, screenplays get all the attention. The ensemble is likeable enough; Douglas Vickers is a hoot as the baroque festival director. But hackneyed plot devices and long-winded monologues detract from the obvious point: art is art, whatever the form. (Lisa Buscani)