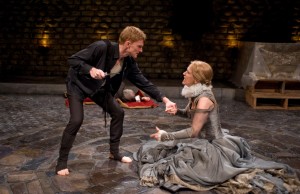 Writers’ Theatre presented such a memorable performance of Tom Stoppard’s “Rosencrantz and Guildenstern are Dead” a few seasons back that it seemed only fitting that the company should mount a full-scale “Hamlet.” The intimate North Shore theater is perfect for revealing the multiple layers of introspection that the Bard’s most famous play requires.

Although director Michael Halberstam’s production is not a contemporized setting in terms of sets and costumes, it is quite contemporary in terms of its outlook and even its sound world (the court likes background jazz at its parties). There is no ambiguity about Scott Parkinson’s Danish prince being mad: the dark opening scene is cut altogether to dispense with any subtext of a real ghost and instead skips directly ahead to open the play in a bright court in motion around a Hamlet that cannot cope, where it is quickly clear that he is the something rotten in the state of Denmark. Claudius and Gertrude seem so regally at home and so reasonable that Hamlet comes off the villain. To heighten how out of touch Hamlet is, his soliloquies occur outside of time and space while others remain around him, but they literally stop to loud sound cues distractingly indicating precise moments of their freeze-frame and his take-off. Yes, there are some glances to the audience, but this is a thoroughly narcissistic Hamlet who thinks and cares only about himself. (Oddly, this same device even extended over into the soliloquies of other characters.) It is an odd and interesting take, but one which has to be grafted on to a truncated text to work.

During the play within a play, Hamlet dons a white skirt, fur stole and a jeweled tiara, taking on the role of the Queen without batting or applying an eyelash and even kissing his theatrical King like he means business. This not only sets up that Claudius’ discomfort may extend beyond his own guilt but brings an entirely new subtext to Hamlet’s relationships, particularly his disdain for Ophelia, who in this production is comparatively benign even in her madness compared to Hamlet. Even the tender graveyard reunion with his childhood friend Yorick rings hollow as, when the court arrives, Hamlet tosses the skull of his friend as if it were a hot potato. This is a Hamlet who is never allowed to be likable to himself nor anyone else. 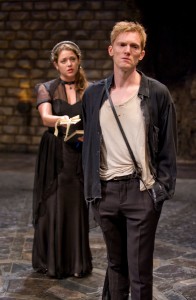 This leaves that quality to other characters despite the fact that it switches our empathies. Ross Lehman’s Polonius is so likable and funny that his scheming side never comes through and his murder is so unjustified that we empathize more with Laertes (Timothy Edward Kane) in his quest to avenge his father’s death rather than Hamlet’s quest to avenge his. Larry Yando’s voice-synthesized and hooded ghost remains otherworldly even when appealing to Hamlet on an all-too-human level. Shannon Cochran’s Gertrude is so authentic and maternal that instead of a potential accomplice to the destruction of her husband, Hamlet comes off as a spoiled brat who is abusive to her. And Hamlet is so out of control that the angst that the character should be feeling has little chance to show its head. It’s as if we were still stuck in the topsy-turvy world of Stoppard’s play minus its humor and irony. (Dennis Polkow)