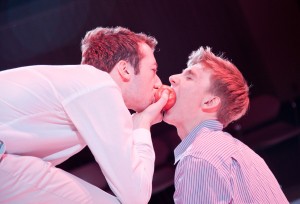 The Third Annual Chicago Fringe Festival has come and gone. The weeklong lineup of forty-seven performance pieces spread across five venues in Pilsen ended last Sunday evening on an enthusiastic audience high and a heartfelt plea for donations. Chicago, a theater city already presenting an imposing number of plays every season, has a skewed view of  the “fringe” compared to many of its fellow metropolises. The city’s cavalcade of small-but-mighty storefront companies, which might just qualify as fringe elsewhere, are but steps away from being the establishment here. So, the Chicago Fringe Festival fills a unique, worthy niche in the city’s theater culture—presenting what is essentially the fringe of the fringe. Theatrical works that might not get month-long runs at Theater Wit, but perhaps should. I took in seven performances at this year’s festival, which I chose based on accumulating word of mouth and luck of the draw.

Of my seven-show sample platter, the most revelatory experience came in the form of a new work called “Pink Milk.” Built by a high-spirited and extremely talented crew of recent college graduates from Evanston, “Pink Milk,” with fast-paced mechanical choreography and poetic narrative, tells the story of Alan Turing, the celebrated English father of computer science and a man criminally punished near the end of his life for being gay. But “Pink Milk” is not a rigid history play by any means. Playwright Alan Paul Young expands upon the real-life facts to embellish powerful, contemporary themes. Turing’s story, ending in tragic suicide, is of particular interest because he grew up personally and intellectually in a crucible of two world wars. Paranoia, and widespread conformism were the norm, and Alan was not. “Pink Milk” embraces those themes stylistically, using perfectly in-sync calisthenic dances that alternate appropriately between carefree and frantic.

Playwright Young grounds “Pink Milk” around Turing’s formative childhood relationship with school friend, Christopher Morcom. Throughout Alan’s life, he returns to the innocence of that first supposed love, blissful against the building pressure and social ostracizing of his adulthood. That pure, childlike emotion is gorgeously rendered by Joe McManus as Alan and Sammy Ziesel as Christopher. A supportive ensemble embodies a number of other roles, the most brow-raising being a Daisy and a Glass of Infected Milk. Those object-centric sections of the play feel out of tune with the rest of the mathematical-though-heartfelt script—being, perhaps, over-poetic. “Pink Milk” could benefit from a longer, ninety-minute running time for both character development and marketability. But the future of this play and this company is bright, indeed.

Four similarly bright young comedian-monologuists  presented “Anonymously Yours” with only four chairs and not a single light or sound cue. The three men and one woman read Craigslist listings signed, yes, anonymously with silly-sad names like “Recovering Nice Guy.” Unlike Bruised Orange’s similar “I Saw You”, featuring pieces from The Reader’s weekly section of the same name, “Anonymously Yours,” while still going for the immature and vulgar underbelly of the web, explored the desperation and reasoning behind people’s online alter-egos. I laughed a lot, but was most taken by the unexpected poignancy at play.

The opposite occurs in Charles Mee’s “The War To End War,” in which you expect poignancy but receive a sensory overload of absurdity instead. Whatever thought is provoked proves much too pretentious and self-serving for any substantial relevance or enlightenment to come through. In satirizing, with great specificity, the 1919 Paris Peace Conference, a Dadaist cabaret, and the nuclear physicists of Los Alamos, the playwright entertains while the audience’s collective higher-thinking capabilities shut off. 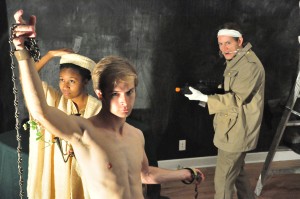 Mee’s subtle title might be the most evocative portion of his play—a lesser-used variant of “The War To End All Wars”—the latter being a hyperbolic expression of the size of World War I and the former reading more literally as a finite end to world conflict. Mee might be reminding us that World War I ushered in the modern era of warfare in which we’re currently immersed—or not. The urgency is shy, basking in an ambivalently surreal glow, and interest correspondingly wanes. Though disenchanted by the play itself, I admired the treatment of it by the Island Theatre Company. The characterizations exceeded easy cartoonishness, and achieved a semblance of empathy. Admittedly these were some of the most transformative and uninhibited performances I saw at Fringe. The integration of Atari-looking projections and encompassing sound were impressively elaborate and dramatically sensible.

If “The War To End War” did not meet expectations, “The UnMasking” craftily exceed them. This was a truly surprising experience for me. And an experience I can guarantee that would not be had at any other performance or from any other seat. The play is an all-too-typical one-person show, the construction is common with too much emphasis put on the wrong events, and told by an emotionally detached narrator. But Alan Green’s real-life story of his wife’s death and the hurdles of its aftermath hit me in a different way. In Green’s play—admittedly written for himself—his daughter, his son, other family and friends are the characters. Green unevenly inhabited them without much vocal variation and overlong transitions into each.

However, perhaps ten minutes into the performance, I realized that the people being portrayed onstage were all sitting in front of me. Their laughs at their brave father, their tears at the memories of their mother, and the shared knowing glances contributed a rich emotionality and loving support to what might otherwise be a just-below-average one-man play. Green himself is an extremely eccentric fellow, who embraces humor as a means of coping with life’s most difficult circumstances. He spoke gleefully about the liberation Second City classes afforded him. And though at an early stage in its existence, this rough-around-the-edges piece wields promise. While this play might never have that same spirit of that evening ever again, this performance warmly reminded me of the theater’s many and evolving purposes, and that some performance is simply beyond evaluation.

Like Green’s onstage therapy, Rebecca Kling’s one-woman performance lecture, “Storms Beneath Her Skin,” artfully detailing Kling’s life as a transgendered woman and her ongoing decision towards having sex-reassignment surgery, is deeply personal and has a grander purpose than simple storytelling. The piece’s message of knowing and fully accepting yourself is strengthened by Kling’s own ongoing growth and willingness to learn more about herself and those around her. Kling’s work, though at times crossing into one-person show clichés, is brought to life by her engaging and likably sarcastic persona. The most stunning moment comes in the unlikely form of an apology letter that displays, not only Kling’s fiery writing ability, but her formidable skills as an orator as well.

Lacking the honesty of  Green and Kling’s testimonials,”The 3 Citrons” is a strange little play based on an old Italian fairy tale. Prince Tomas seeks a Princess, birthed from an orange tree, with the aid of his two foul-intentioned step siblings. As the play continues, princesses are violently killed, while Thomas is sheltered from the grim reality of the situation. The murders and hijinks are punctuated by back-room video testimonials that stop the snowballing action dead in its tracks. Hollow Tree’s production, overflowing with personality and a sly prom-night-from-hell aesthetic, lacks clarity and is too totally consistent to continuously excite. The performances—particularly those of the royal step-siblings—are funny and abound with quirk, but the story does not live up to the talent of its ensemble.  “The 3 Citrons” does, however, forward Fringe’s unintentional 2012 motif of dangerousness, and its gory, slasher flick violence sequences are a true highlight. 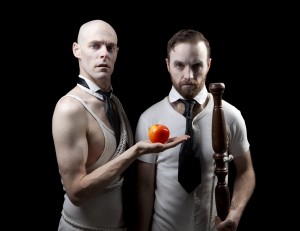 The final performance I saw, and another Festival favorite, was “Handshake Uppercut,” a seemingly innocuous two-person clown act, that, through a deus ex carotene, takes an alluringly freakish turn. The two performers, John Leo and Jay Dunn, begin darkly, with Dunn barbarically dragging Leo across the floor by rope. The duo of mute clowns, Dunn, bearded with brooding eyes, and Leo, bald and eerily aristocratic, have a brotherly animosity that drives their playful confrontations to humorous but dastardly sinister culminations. A final sequence involves a woman randomly picked from the audience, and contains some of the funniest and oddest  one-upsmanship you’re likely to ever see. A joy of any Fringe Festival, for me, is to witness all of the supremely creative use of space—and these guys fulfill that in spades. Cleverly placed clip lights, crawls through the audience, and lobby-set scenes reinvent the room into a Victorian fun house. The Chicago Fringe Festival, in its third year, is looking mighty fine. Here’s to a fourth! (Johnny Oleksinski)