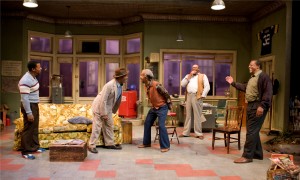 Playwright August Wilson, who sadly and prematurely passed away in 2005, was a master craftsman of both character and situation. Throughout his Pittsburgh Cycle, ten plays chronicling the black experience of the twentieth century, one encounters some of the most jovial, heart-wrenching, and frighteningly believable moments of the American theater.

Honestly, every single time I replay that gorgeous, aching scene in “Fences” in which husband Troy tells wife Rose, not only that he has been unfaithful to her, but that the woman he has been unfaithful with is pregnant, I close my eyes and exhale. It was during that same seismic scene in the Broadway revival that the enraged audience loudly and vocally condemned Denzel Washington’s Troy—an intense, binding feeling of community extending far offstage and into the balcony standing room where I was pleasantly engrossed. “Fences” is arguably the most popular and frequently performed part of the Pittsburgh Cycle, but a lesser-known and no-less-moving section is “Jitney,” which opened on Saturday evening at Court Theatre.

“Jitney,” a word you won’t hear much around Chicago anymore, is synonymous with an unlicensed car service. Wilson’s entire two-act play is set in the office of a jitney cab station, owned and operated by the physically and morally sturdy Becker. Just as in all of Wilson’s plays, the drivers of the jitney cabs are made immediately distinct, and become, all at once, adored and vilified—the audience’s relationship to each character mimicking the “love ‘em, hate ‘em” complications of siblinghood. The playwright understands a person’s—and a neighborhood’s—multifaceted being, and he, not once, underestimates or condescends to this unlikely group of friends and drivers.

Becker (A.C. Smith), Youngblood (Kamal Angelo Bolden), Turnbo (Allen Gilmore), Doub (Cedric Young), and Fielding (Alfred Wilson) casually make up the driving force, some having been in the business for twenty years, and some being not too much older than twenty years. The guys complain about every little thing–carrying luggage in their trunks, the punctuality of patrons, the monetary value of a ride–all of which break Becker’s five prominently posted rules. Doing double-duty as a church deacon, Becker’s rules are nothing short of the Five Commandments.

“Jitney” must be among Wilson’s most dramatically viable settings—a cab station facilitating constant comings and goings, never-ending phone rings, and a hard worker’s exhaustion that can, at any second, flip into violence. The genius of the fast-paced, nearly episodic quality of “Jitney” is the discreet transition from farcical to desperate. Wilson grabs you with buddy humor and Melissa Torchia with groovy orange seventies wardrobes, and makes you sit it out for the hardship, the loss and the superhuman perseverance.

“Jitney” marks the twentieth August Wilson production that director Ron OJ Parson has been involved with, and his learned compassion for the playwright, the players and the place is palpable and deep-rooted. Parson moves the characters about Jack Magaw’s meticulously detailed cab station without flourish or unnecessary comment. Smartly realized, and a wonder of timing, are character entrances and exits. Through the station’s large windows, the street outside is surreally visible. The audience watches each character walk along that window for a few seconds before they come in the door, which builds remarkable tension and devilishly plays with our expectation—that Shakespearean sensation of being one step ahead of the game.

Parson has also cast a fluid and generous ensemble of actors, each of whom completely understands that he acts, not only as an individual, but that he willingly contributes to a kindred whole. A.C. Smith’s Becker has led a difficult life. His son, Booster (Anthony Fleming III), in a flame of passion, killed a lover who falsely claimed he raped her, landing Booster behind bars for two decades. In the immediate aftermath, Becker’s wife died, essentially of grief, and Becker completely devoted himself to his church and his business. “Jitney” sees the return of Booster as he is released from jail, and the second act illuminates Becker’s only major flaw–his inability to forgive.

Father-and-son relationships have always been some of Wilson’s most hard-hitting and accurately portrayed. Here, Smith, a titan of stage presence, and Fleming, looking reformed while repressing pain, dig into all possible crevices of meaning and insight buried within their interactions, knowing that the playwright was a sly wordsmith and an emotional lightning rod. The other major relationship of “Jitney” concerns Youngblood and girlfriend Rena (Caren Blackmore), as Youngblood endeavors to rise up to the challenge and responsibility of fatherhood. The entire cast rides these powerful scenes like a veteran surfer moving in seeming tandem with a wave. During one particularly contentious altercation, actor passions were running so high that Angelo Bolden, aggressively pushed into a couch, actually flipped the couch over. Purposeful or not, the couch flip cultivated an unforgettably frenzied energy in the audience. In that moment, it became crystal clear that every last molecule of these actors was alive and kicking in Pittsburgh, 1970. (Johnny Oleksinski)