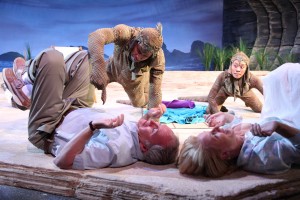 “You have had a good life,” the ready-for-retirement Charlie declares to his wife Nancy as they verbally joust during a beach vacation. In playwright Edward Albee’s hands, this off-the-cuff declaration is toxic, its past tense cutting to the heart of an emerging conflict between a seemingly content couple nearing their twilight years. After decades of working, raising children and so on, Charlie has “earned a little rest” and wants to do nothing. Nancy wants to do anything but nothing; she’s ready to take on the world’s glaciers, to live on its beaches. She recoils in anger at his choice of language and the conflict seems destined for impasse. It’s a universal concern that surfaces explicitly for this highly educated, upper-middle-class couple: we live this life, we follow its rules and do all the right things, and what does that earn us? Regress to an infantile state of rest and games until we die? Or “see the world twice” and what for?

The argument suddenly seems trivial (even if it is not) in the face of both jeopardy and childlike awe, when a couple of human-sized lizards wander in and open up a conversation about love, existentialism and matters both primal and conceptual. Albee’s cleverly playing with a duality of the escape impulse (“Seascape,” get it?)—the humans escaping the humdrum of life; the lizards the proverbial primordial soup. It’s not an equivalent quest of course, and the relatively smaller concerns of Charlie and Nancy fade mostly into the background. This brilliant play (a Pulitzer winner) manages to convincingly mix the personal story of Charlie and Nancy with universal questions—and talking lizards!—in a manner driven by sly shifts in semantics that both entertain and speak larger truths about progress and philosophy.

It’s tempting to give all the credit to the text in a play such as this, but it’s easy to see how, in less accomplished hands than director Nick Sandys (who’s debuting this season as Remy Bumppo artistic director as well), the absurdity of the situation might turn campy. So too, the delicate interplay of the human couple lives and dies on timing and tonality in line deliveries, and it’s hard to imagine a better Charlie than Patrick Clear, whose world-weariness, whose entire physical demeanor, seems to argue against the value of evolution, at least until his survival instinct is engaged and he finally comes to life. Annabel Armour inhabits Nancy fully, her vitality apparent not only in her lines and her still-vibrant sexuality, but in her intonation, which conveys the fullest range of emotion her character is capable of. In especially challenging roles, the lizard couple really delivers as well, not only in conveying as much authenticity as two talking reptiles can, but in developing characters with their own distinct personalities. Sean Parris is both menacing and endearing as Leslie, a kind of Cowardly Lion coming to terms with his emerging “humanity” as he seemingly commands the entire physical space of the theater; Emjoy Gavino is equally charming as his loving and calming, rational wife. Angela Weber Miller’s seaside set inhabits the space so fully that it takes a minute to realize it’s not a permanent part of the theater, and Rachel Laritz’s costumes and makeup manage to make the talking lizards more believable than even that Geico gecko on the tube. (Brian Hieggelke)