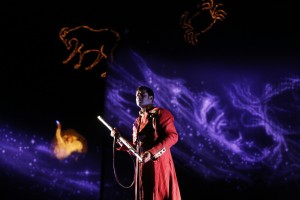 Several memorable Mozart productions have been directed by Diane Paulus and conducted by Jane Glover during Brian Dickie’s thirteen-year tenure as general director of Chicago Opera Theater. Thus, it seemed a fitting finale to Dickie’s Chicago career that the team would reunite for Mozart’s final opera, “The Magic Flute.” When the Paulus production proved too costly, that creative team fell by the wayside and COT had to start from scratch. Along the way, the Queen of the Night was vanquished by visa difficulties. As if all of that were not enough, timing was such that this would be no less than the third “Magic Flute” production heard here in less than a year. What possibly could make another production worth seeing even under the best of circumstances?

Happily, a great deal. Yes, British director Michael Gieleta gives us an often static and minimalist production, downright stark by the elaborate standards of Lyric Opera’s long-running August Everding production. But thanks to designer James Macnamara and light designer Julian Pike it is an elegant starkness, the blackness of the universe with painted galactic stars and suspended spheres acting as planetary bodies. This refined look almost makes up for such cheesy special effects as a dragon that is basically a rope with Christmas lights around it and costumes that run the gamut from generic tunics to Papageno (Markus Beam) in Nostalgia Critic attire. 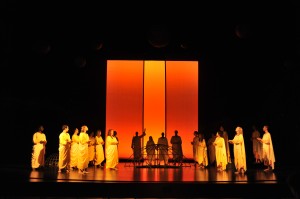 But what really stands out about this production is the high quality of the singing from an extraordinary young cast that pays careful attention to Mozartean phrasing and with superb diction in—surprise—English! Being a singspiel, in effect, an eighteenth-century musical with set pieces set off by spoken dialogue, singers are often required to recite loads of lines in German, which go by faster than subtitles can keep up with. Or the lines can be said in English and the music sections sung in German, or the lines gutted and narrated in English with German sung sections as Ravinia did last month. Or do what this production does quite effectively: place the spoken portions and musical sections both in English—in an exquisite translation by Jeremy Sams—so you are really drawn into the narrative in a very organic way. It helps that the singers are not amplified during the spoken portions, always such a distraction going back and forth at Lyric, and that subtitles are used for the sung portions, even though diction is so consistently clear that they are almost unnecessary.

Making his Chicago debut, tenor Sean Panikkar is a fabulous Tamino and has a wonderful chemistry with soprano Elizabeth Reiter’s Pamina, despite some oversinging on her part on Saturday’s opening night. Russian bass Grigory Soloviov, also making his Chicago debut, is a lustrous Sarastro and Emily Hindrichs stopped the show as the Queen of the Night, replacing the originally announced Irish soprano Claudia Boyle. British conductor Steuart Bedford keeps things lively and well-balanced in the pit. (Dennis Polkow)