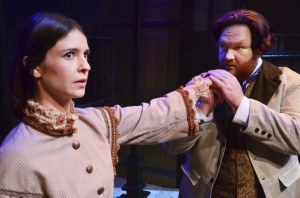 An epistolary novel, a story told in letters—or “snail mail” for my millennials—is an especially gnarly beast to dramatize because of the unique romantic confidence a letter carries. Spoken dialogue derived from a parcel of letters is often grossly descriptive and much too deliberate to achieve any real surprise—having the editorial advantage of the writer’s retrospect. What you arrive at is a smattering of characters more concerned with an eloquent retelling of their past than alive within their murky present. And the present is the theater’s meat and potatoes. These oft-seen woes are the insurmountable flaws facing Robert Kauzlaric’s world-premiere adaptation of Wilkie Collins’ “The Woman In White” at Lifeline Theatre.

“The Woman in White” was originally published in 1859 episodically over the course of that year and, I imagine, in installments is the ideal manner for this labyrinthine mystery to be ingested. For Kauzlaric’s adaptation is three exhausting hours of non-stop exposition, affording an infinitesimal amount of time to reflect on the impact of the preceding events. And there is an encyclopedia volume’s worth of events to reflect upon.

Some are simple, easily understood incidents like shocking illnesses and deaths, but others are far more obscure parlor-scene-resembling scenes discussing legality, parentage—Victorians do love an orphan—and other past occurrences long forgotten. The result is what I imagine a seventeenth season of “Downton Abbey” to look like. Extremely well-costumed (Aly Renee Amidei) Britons reaching, with strained effort, at sensationalism, while procuring recycled aristocratic quips from a collector Dame Maggie Smith figurine.

Collins’ tale, still regarded highly in literary circles and notably adapted for the musical theater by Andrew Lloyd Webber, sees a young, aptly-named Laura Fairlie (Maggie Scrantom) fall in love with her drawing instructor, the idealistic and, yes, also aptly-named Walter Hartright (Nicholas Bailey). But the wealth and dominating masculinity of Victorian society forces Fairlie to marry Sir Percival Glyde instead (played by the adaptor, Kauzlaric), who, in cahoots with the slightly Italian Count Fosco (Christopher M. Walsh), attempt to embezzle Laura’s lofty estate. All the while, there is another woman, Anne Catherick (also Scrantom), twitching and convulsing around town, who bares an eerie resemblance to Laura, and speaks a quirky combination of cockney and modern-day London dialects. 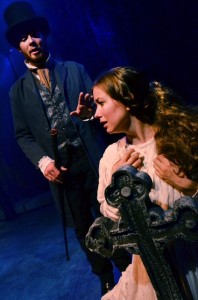 The identity of the woman in white becomes the core question of the play. And a question whose answer offers an unsatisfying payoff. Initially infatuated with the possibility of a doppelgänger—the date of publication is ripe for a strong splash of doppelgänger—or, perhaps, a split personality, the ultimate lack of supernatural or that which is out of the ordinary was a true disappointment for my inner and outer geek. Being sensational, the story’s primary goal becomes ridiculing societal conventions to a chorus of gasps and nineteenth-century outrage. But today, it only confounds and bores.

The cast does mostly right by the over-knotted material. Scrantom’s Laura and Anne are both vulnerable victims of circumstance and fate. As sister Marian Holcombe, Lucy Carapetyan seems right at home in her dark Victorian setting, and is not nearly as comely as she claims outright to be. And though I was thoroughly mystified as to the through-line of their motivations, Christopher M. Walsh and Robert Kauzlaric make for the evilest of villains as Count Fosco and Sir Percival Glyde respectively. However, Fosco’s antagonizing is often defeated by the actor’s silliness.

Silliness abounds, in fact. This adaptation, more literary than theatrical, pokes fun at its source a touch too often for an audience to take the three-hour drama seriously. All players are very aware of the situation’s unraveling ridiculousness, and make no valiant attempts at hiding said awareness. Director Elise Kauzlaric navigates the story deftly with scenes efficiently defined, outside of the three entrances’ awkward spatial relation to Alan Donahue’s set. But the play’s hefty timeline proves far too rich and decadent to be fully enjoyed. (Johnny Oleksinski)