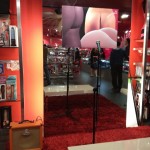 It’s a breezy, idyllic summer night in Roscoe Village. The sleepy, family-oriented neighborhood that houses pretty moms in yoga pants has fallen silent by 8pm on a Monday. It’s hard to imagine walking into an establishment in this neighborhood that doesn’t have a kid’s menu. Just north of the Paulina Brown Line station, however, exists a strip mall, barren except for a lone storefront: The Pleasure Chest. Its floor-to-ceiling glass windows aren’t modest, and they expose red-drenched walls displaying dildos and vibrators to anyone who passes by. My companions and I tiptoe to the back of the shop, late and bashful, feelings that turn into mortification at the realization that the last open seats are in the front row.

“Performance Anxiety,” helmed by comedian TJ Miller, came to Chicago as part of the Just For Laughs Festival in June. A standup showcase that used the talent of comedy veterans and newbies alike, the show was well received in Los Angeles. The Pleasure Chest leapt at the opportunity to house the event in Chicago, now occurring the third Monday of every month (with observance and rescheduling for national holidays).

Host Rhea Butcher says  “A comedy showcase in a sex shop is a unique perspective. Comics were looking to pick up this branch, and [Performance Anxiety] gives people a space to work things out.” As with most questions on Chicago and its relationship to comedy, Butcher was quick to speak fondly of the environment in which these performers work. “The thing that’s great about Chicago—it’s a training ground for comedy with a tight-knit community.”

“Performance Anxiety” at The Pleasure Chest, 3436 North Lincoln,  free, 18+, 8pm. Held the third Monday of each month, the next show is Monday, September 24.