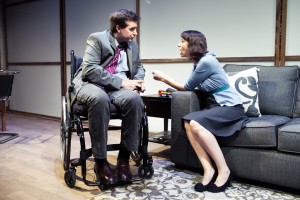 Matt Barnes is a self-proclaimed “vulture”—a finance man—wisely reminding us that vultures too must feed and protect their families. Matt holds the audience closely in his confidence, craftily interjecting narration into scenes. But Hinderaker’s narration defies the traditional cliches of interspersed omniscience. The monologues inform the events, but also allow Matt to maintain and deepen his emotional involvement with them—less like “Brighton Beach Memoirs” and more like colloquial soliloquies. Matt, having been underprivileged as a young boy, has big goals for the comfort and security of his wife, Katie, and the couple’s unborn daughter. But, after a contentious altercation with his smarmy boss, Terry (a shady and hilarious Paul D’Addario), Matt finds himself out of work and in dire need of monetary sustenance.

But like Macbeth and his Lady, “that lowliness is young ambition’s ladder,” and in one decision after another, they compromise their golden rules, betting the success of Goodsex.com  on one rather-underage-looking, generally exotic performer, Mikayla Alvarez (Mouzam Makkar manipulating others with disguised authority), who they boldly repackage as “Amerika.”

From the earliest moments of the remarkably absorbing “Dirty,” Hillary Clemens’ Katie and Michael Patrick Thornton’s Matt are so relatable, fresh, and approachably witty that the audience has no choice but to happily side with them. That earned approval enables Hinderaker to devilishly raise up our hopes only to crush them with a single, unexpected signature. Director Jonathan Berry’s sparse and swiftly transitioned production draws particular focus to a motif in Hinderaker’s play—near exits. Values, pasts and cultures shaken and offended to their ironclad core, a character will storm out of the room only to weakly halt in front of the room’s door as a huge dollar amount is thrown out. In our tireless pursuit of the American Dream, have we arrived at a place where, no matter the price, we can be purchased? Hinderaker, without pointing fingers or pompously whining, seems to be proposing that society has, indeed.

Just about every character’s integrity—well, those who had integrity to begin with—is nowhere to be found by play’s end, with the exception of Mikayla’s sister, the fifteen-year-old April (a not-too-naive Atra Asdou). April’s life exists at the greedy whims of the money-grubbing adults around her—the playwright expressing an optimism for the young, the untainted. Hinderaker, well known in Chicago for “Suicide, Incorporated” and last season’s acclaimed “I Am Going To Change The World,” has elevated his already formidable play with April’s vital presence. And though, at two hours forty minutes, the play is a touch too long, and the final scene becomes imposingly congested, the last, striking image of April standing alone onstage displays the most dangerous consequence of our brightest intentions becoming dirty. (Johnny Oleksinski)