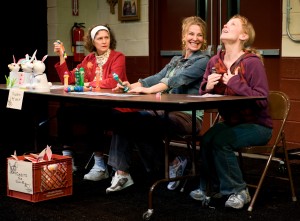 Margaret (Mariann Mayberry), a local from working-class South Boston, loses her job at the dollar store and reaches out to ex-flame and successful doctor Mike (Keith Kupferer) for help getting another. The result is topical class comment that discredits the “we built this” air of Republican entitlement.

David Lindsay-Abaire’s smart script refuses to surrender to stereotypes and forces the audience to question who to root for. He avoids characterization to accurately dramatize grinding poverty and the condescension of good intention. Director K. Todd Freeman stays on top of the energy and the pacing, while Walt Spangler’s set visually details life with and without money.

Mayberry, Lusia Strus and Molly Regan as Margaret’s friend and landlady, capture the perseverance, unfailing good humor and necessary meanness that accompanies a life lived “at risk.” It’s a poignant look at money and choices, and how the lack of one corrupts or limits the other. (Lisa Buscani)