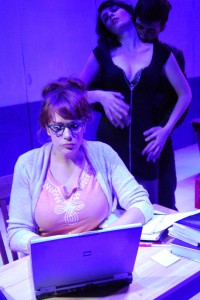 The unprecedented rise of E.L. James’ “Fifty Shades of Grey” series could not have happened five years ago. The trilogy, which is essentially an overdrawn romance novel spiced up with  acceptable kink, is a hugely popular indulgence on those nifty e-readers—Kindles, Nooks and Crannies. The anonymity that a bland, plastic tablet affords was never available on those garish trade paperbacks adorned with a shirtless Fabio, hair blowing in the wind. But today, a businessman on the train, dapper and desirably careless on the outside, on the inside, might be reeling over the breakup of Anastasia Steele and Christian Grey. That coverless e-reader allows for an active intersection of fantasy and reality, which are, both, in tandem, becoming darker by the minute. As these two worlds become acquainted, however, is there a chance of monstrous collision?

Paula Vogel wrote her one-act play, “Hot ‘N’ Throbbing,” in 1994, thirteen years before the advent of the Kindle and in the days before a consumer-friendly internet. But beyond a few loud-and-clear nineties expressions—for example, “Fudge!” instead of its, now milquetoast, root expletive—”Hot ‘N’ Throbbing” is prophetic in its contemporary relevance, disconcertingly warning of the dangers of our fantasies gone awry. An eighty-minute work every bit as pressing and entertaining as Vogel’s Pulitzer Prize winner, “How I Learned To Drive,” “Hot ‘N’ Throbbing,” with frank, no-holds-barred depiction, imagines a catastrophic convergence of pornography, escapism, family life and domestic violence on a single evening in a woman’s home. Interrobang Theatre Project,  guns ablaze, at the Raven Theatre, dives headfirst into the play’s challenging themes, and offers a rare production in which every element onstage is as robust and capable as every other.

Charlene writes erotic screenplays, which she defends as “feminist,” to pay the bills. She understands that she is a literary novice, but also revels in the euphoria of her fiction. The separated wife and mother of two believes her best writing to occur in a sort of trance, personified onstage by a multipurpose chorus of her creations—a man and woman played respectively by Griffin Sharps and Casey Wortmann. Sharps and Wortmann’s voices are ethereally amplified by sound designer Christopher Kriz so that very little live speaking permeates our ears. Kriz’s powerful manipulation causes the chorus to sound alternatively  menacing and sultry, depending upon the trials of their circumstance.

The middle-aged mom’s two teenaged kids, the meek and nerdy Calvin (Andrew Goetten) and the rebel Leslie Ann (Stella Martin), have been raised in a horribly abusive environment. Their father, Clyde (Matthew David Gellin), having a far gone problem with alcohol, received a restraining order the day before this play is set, following a brutish fight between him and Charlene. Tensions run high and, combined with Vogel’s experiments in style, a number of genres emerge over the brisk eighty minutes. The quick shifts from humor to dire seriousness to literary allegory, supported by the actors’ uniformly skilled comedic and dramatic abilities, mimic society’s short attention span and even shorter temper.

Director Jeffry Stanton’s fast-paced and appropriately sickening “Hot ‘N’ Throbbing” has furthered my already unwavering faith in the design ingenuity of storefront theater. The dazzling and the impressive are not achieved through detailed living rooms and sky-high budgets, but through intelligent allocation of resources—as Interrobang here demonstrates masterfully. Kriz’s precise sound design marries seamlessly with  Claire Chrzan’s lights to create uncountable moments of extreme shock and awe. Following suit, the ensemble, usually a red carpet club for actors, graciously extends to the designers and the playwright. And Vogel’s heightened theatrical statement on the oncoming danger of our pressure-cooker times could be offered no finer treatment. (Johnny Oleksinski)