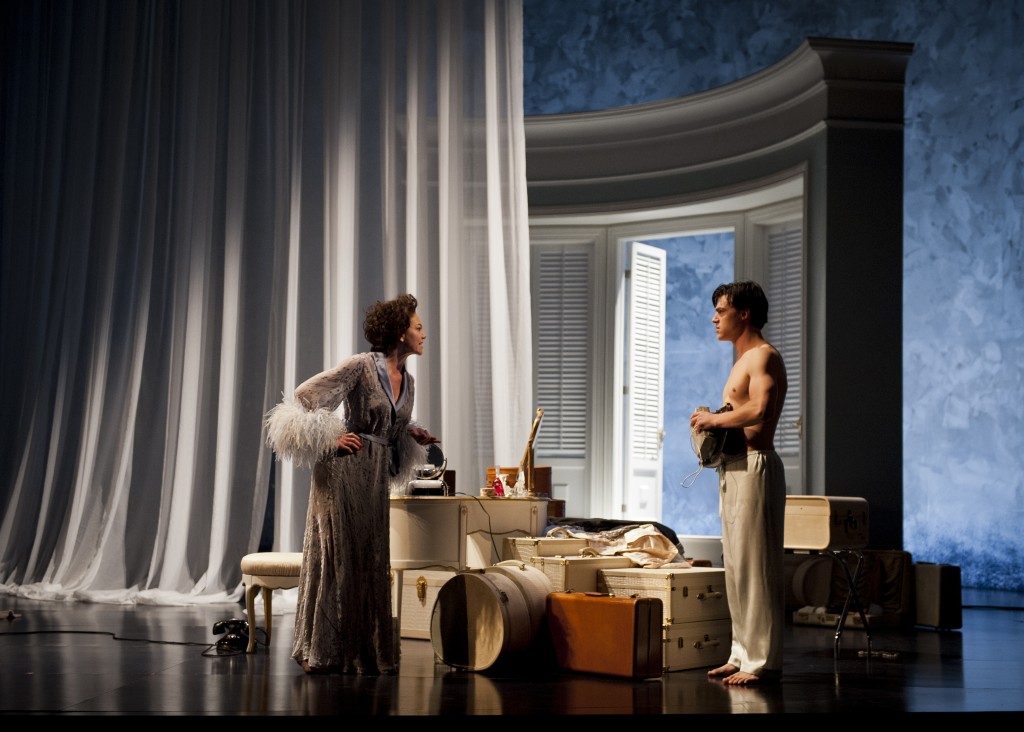 Having directed a brilliant revival of “A Streetcar Named Desire” at Writers’ Theatre a few seasons back—which has also since played the Williamstown Theatre Festival—it was a natural for David Cromer to return to Tennessee Williams. With all the resources of the Goodman Theatre at his disposal, and back in his hometown after successes in New York and Los Angeles as well as a 2010 MacArthur “Genius” grant, Cromer has turned to Williams’ last real success, “Sweet Bird of Youth.” Although Cromer was originally slated to direct the play last year on Broadway, New York’s delay is Chicago’s gain.

Characteristics that have become Cromer hallmarks, including creating a larger-than-life scenic environment (courtesy of James Schuette) are obvious from the moment you enter the theater, as the soft winds of the Deep South are heard and felt and a translucent white curtain gradually reveals an elegant baby-blue-and-white hotel room. A shirtless, at first rather boyish-looking man (Finn Wittrock as Chance Wayne) is lounging in bed and rises to reveal he is wearing solid-white silk pajama bottoms. Soon we discover that hidden amongst his pink sheets is a beautiful female companion in black lingerie (Diane Lane as the Princess Kosmonopolis). As the dark world of this couple is revealed, insidious insight by insight, the juxtaposition of their apparent attractiveness forms an ironic and humorous paradox with what unabashedly despicable people they are. In a brilliant touch, the curtain and wall at times show faint projections of dreamlike images of the past, including our first look at a youthful Heavenly (Kristina Johnson).

As the Princess carefully makes herself up to look like something she is not, she goads the lover she can scarcely remember hooking up with to “audition” for her in more ways than one by having him tell his life story. Chance’s brilliantly botched attempt to act his backstory in an authentic way is another delusion, for him, and as his character climactically reminds us quite explicitly later on, for all of us as well. Smoke and mirrors fill a world of Southern charm more phony than the Hollywood backlot that shopworn starlet Princess already is past her prime to operate in and that Chance hopes to break into via her backdoor help. Particularly effective is how effectively Chance communicates his emasculation as Princess dissects him with the skill of a surgeon. 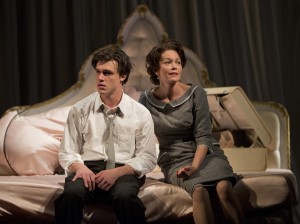 For every scene, whether the Finley family home or the hotel bar or terrace on a slowly moving turntable for cinematic-like scene shifts, we are always in a beautiful world. People are impeccably dressed and well-mannered, but under the surface, things are not as they appear throughout the play. John Judd’s Boss Finley portrayal is magnificent for its explicit but subtly expressed worldview that desegregation threatens female chastity. Too often, racist lines like these are telegraphed with discomfort or anger, but not here: this is a world where blacks not kept in their place so threaten the status quo that citizens will think nothing of castrating a human being to make the point. Boss Finley will not go that far, of course, at least publicly.

Every character in this world is an authentic hoot. Boss Finley’s lover Miss Lucy (Jennifer Engstrom) is decayingly coquettish. Aunt Nonnie (Penny Slusher) is ashamed to even be seen with her nephew, but even she can still fall prey to what is left of his sensual charm. It is a magnificently bright and dark journey all at the same time, always with an eye and ear on the indelible and haunting theme that appearances are virtually always deceiving. Nonetheless, that doesn’t stop us from being attracted to them, and holding onto them long past their time, and ours. (Dennis Polkow)