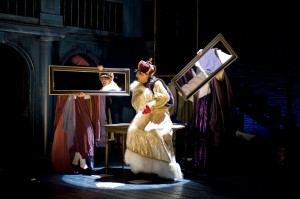 Remember, remember the fifth of November, gunpowder, treason and plot… So begins the rhyme that commemorates the central event of Bill Cain’s immensely entertaining ode to art, politics and the perils of negotiating both. It’s a play about learning to lie honestly and artfully.

A past-his-prime “Shagspeare”(a reliably deadpan Marc Grapey) is approached by Sir Robert Cecil (a suitably poisonous Mark Montgomery) to write a drama about a current event, the foiled attempt by Catholic rebels to blow up Parliament. Shag is drawn into a cat-and-mouse game of political intrigue and in the process, discovers himself as a man, artist and father.

Cain’s script is witty and referential without being clever-clever. Director Sean Graney keeps careful track of the meta flips between art and life; his original, sometimes frenetic staging hammers home the fact that while art and life are one, art’s the more honest of the two. (Lisa Buscani)