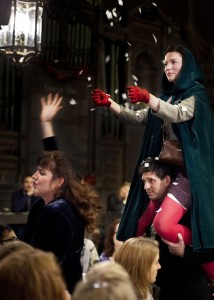 Coming to Chicago all the way from the National Theatre of Scotland, “The Strange Undoing of Prudencia Hart” features a fine set of musicians and actors acting out one devil of a tale. Complete with fiddles, drums and other folk-centered instruments, the cast sings and acts out the story of one Prudencia Hart, a professor as prudish as her name. After attending a tedious conference in remote Kelso, she finds herself snowed in at a pub. Although at first excited at the opportunity to record traditional folk music at this Scottish Borders town, she is aghast to find that karaoke here is the music of choice.  Worse, she is trapped at the bar with her nemesis, a self-absorbed professor of folk who preaches the virtues of modern tastes.  When the locals become bawdy, Prudencia looks for a way out and finds herself in the company of the devil himself.

Given the wonderful Highland music strummed throughout the performance as well as the readily available liquor, the story here is much better than it has to be. In addition to some genuine suspense, the audience is treated to the most unique vision of hell this side of Sartre. Never will I look at a bed and breakfast in quite the same way. Acting here is also topnotch with Melody Grove making a very convincing Prudencia. David McKay’s performance also more than gives the devil his due. But it is the music that really sets the mood and transforms the Chicago Shakespeare upstairs theater into a happening pub. I did not even mind the audience participation and found myself waving my arms along with everyone else during the final crucial scenes. I did hold out, however, to the benefit of everyone around me, on the singing. (Noel Schecter)