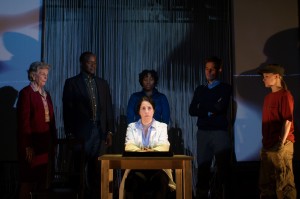 I’ve little patience for dramas that paint scientists, mathematicians, and the like as cold, unfeeling androids. Such an empty storytelling approach is too uninspired and dishonest to reflect a relatable human struggle worth watching. Frequently the emotionless monsters, holed up in their laboratories, noses buried in textbooks, force out unearned sympathy via some debilitating disease or the sorrowful-but-manipulative deterioration of a loved one. It’s a contrived theatrical formula that has been stretched to its limit time and again by plays like David Auburn’s “Proof,” Moises Kaufman’s “33 Variations,” and now, M.E.H. Lewis’ heavy-handed new work, “Freshly Fallen Snow,” which opened on Friday night at Chicago Dramatists.

“Freshly Fallen Snow,” directed by Meghan Beals McCarthy, embraces the apparently real scientific possibility of retroactively dulling an event’s emotional impact on the brain, effectively eradicating the long-term memory. It’s an enticing premise, to be sure, and an extraordinary circumstance that served the Charlie Kaufman-penned film “Eternal Sunshine of The Spotless Mind” far more insightfully and enjoyably than it does here. Lewis unwisely whittles down the expansive mysteries of the brain to black-and-white traumas that are kept or tossed on a whim, contrasting with the imaginative blur of McCarthy’s ensemble transitions.

Dr. Jane Smith nervously addresses a conference with a PowerPoint presentation on the success of her controversial experiments with chimpanzees, and announces a plan to shortly begin human trials. Well, those trials never really occur in the play. Wanting to squeeze funding out of the military, she does begin seeing a soldier named AJ, home from Iraq, who is in denial about her post-traumatic stress disorder. The doc makes her autograph a waiver and gawks some at live images of the girl’s brain, but that handful of sessions sees Dr. Smith play—not the curious scientist—but the devious psychologist. She awkwardly attempts to wrangle difficult stories out of the troubled AJ with half-hearted conversations about Barbies that damage her own scientific credibility. Smith speaks of the treatment, still assumedly in a state of clinical trials, as though it is a guaranteed fix, quick and certain as an Advil Liqui-Gel.

With the experimental treatment seemingly removed of any medical risk, the drama primarily ponders another question. Why won’t AJ and Smith’s German mother, Clothilde (Ann Whitney) accept the life-changing treatment? Of course, those in the audience without fangs and witch hats understand the reason instantly. Painful though the memories may be, our personas and identities amount to an accumulation of past hurdles and how we dealt with them. These characters want to keep on growing and learning, but the unrealistically frigid Dr. Smith just cannot grasp their point of view. And, by play’s end, she barely does.

Smith, Lewis’ main character, played with a frustratingly even temperament by Kirsten D’Aurelio, introduces the central issue facing “Freshly Fallen Snow.” During the two-act play, we learn next to nothing about her. Yes, her mother and best friend—a stereotypically gay man who insults her wardrobe and applies her lipstick—are featured in relation to the doctor. But few details are actually revealed about Jane herself. Her mother’s post-traumatic stress disorder, a consequence of the bombing of Dresden she survived in the formative years of her youth, drives Smith’s research, but her own experiences—those that matter most—remain conspicuously silent. What effect has mom’s PTSD had on Jane over the years? Was it a heated moment with Clothilde that pushed Dr. Smith into neuroscience? Currently the play’s narrator facilitates the journeys of others, but doesn’t go on one herself.

There is a spare sophistication in certain design elements of “Freshly Fallen Snow.” Rasean Davonte Johnson and Anna Henson’s projections of unnaturally attractive precipitation and terrifying war imagery are ethereally obscured by Courtney O’Neill’s simple, functional set of hanging string. But, featured on the streamlined set, Lewis’ dialogue, stunted by illogical, immobile character arcs, is packed to the edges with simile like a hoarder’s storage unit. Soldier AJ, without missing a beat, speaks unnatural phrases such as “Everything slowed down like Neo in ‘The Matrix'” and “You wanna stick a needle in my brain and and suck out my memories.”

If Lewis’ portrait of a scientist is unconvincing, then her roughly hewn caricature of a military person is utterly unfathomable. In relived flashbacks, the depravity that AJ’s fellow soldiers resort to, as a result of wartime stress, strays impossibly far into the Darwinian realm. Clothilde’s flashback to her childhood as the young girl’s mother protects a local Jewish family from the perils of the Holocaust is the closest the play comes to genuine feeling, and the nearest it wanders toward the purity and renewal that its title not so subtly implies. (Johnny Oleksinski)

Jane’s story/motivation is clearly told, and you’ve touched on it yourself. Her research is driven by her need to relieve her mother’s pain. She’s not a cold, emotionless clinician. The effects of her mother’s PTSD are obvious, from the nature of her research itself to her interaction with other academics. In just one scene with a fellow researcher it is simply and effectively illustrated that Jane has put her personal life aside to help her mother. Her head is not buried in text books because she cannot feel. Her life is her research because she doesn’t want her mother and… Read more »

The character AJ wants to return to war and will agree to do anything to get there. The military says she can if she does this study so clearly she pretends to agree to get back there. To finish her job/life. If you watched the end of the play it explains WHY she can’t have the treatment. People are very multifaceted to assume they can’t discuss barbies or have mixed emotions is absurd. I thought it was a beautiful production and a gorgeous story. It took my breath away and made me think…where would I be without my memories? Where… Read more »